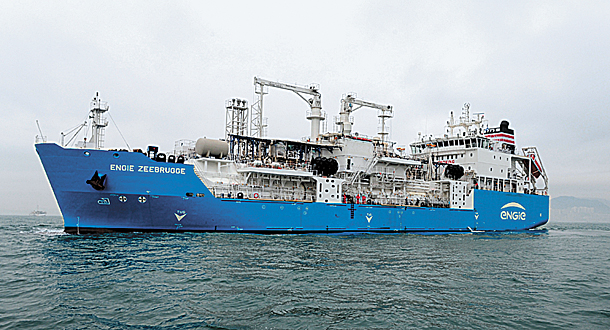 Hanjin Heavy Industries and Construction has become the first shipbuilder in the world to complete construction and deliver a liquefied natural gas bunkering vessel, the company said Thursday.

LNG bunkering refers to the provision of fuel to LNG-powered ships. Ships have conventionally filled up LNG through tanks or bunkering facilities on land, but LNG bunkering vessels allow them to fill up at sea.

The ship, named Engie Zeebrugge, was delivered to LNG Link Investment AS, a joint venture between France’s Engie, Belgium’s Fluxys, and Japan’s Mitsubishi Corporation and NYK. The vessel will be used to supply gas to LNG-powered ships heading to Northern Europe.

“The order for the ship was highly spotlighted because it was the first time such a large LNG bunkering ship was ordered for common use,” the company said in a statement. “Until then, there were only small bunkering ships or barges to supply fuel for specific ships.” The bunkering ship can supply up to 1.3 million gallons of LNG to ships at sea, Hanjin said.

The market for LNG bunkering ships is expected to grow as more vessels will be powered by LNG.

“LNG-powered ships are over 20 percent and a maximum 50 percent more fuel-efficient than oil-powered ships while greatly cutting on greenhouse gas emissions,” a Hanjin spokesperson said.