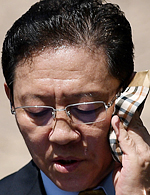 Ko Young-hwan knows only too well the ways of North Korea’s Foreign Ministry. He was a part of it, serving as first secretary at the North Korean Embassy in the Democratic Republic of Congo in 1991 before deciding to defect to South Korea. That was the end of a 13-year career representing the most reclusive nation on the earth.

More than two decades have passed, but Ko, now vice president of the Institute for National Security Strategy, a research center affiliated with South Korea’s National Intelligence Service, still has plenty of memories of his former colleagues. That includes Kang Chol, North Korea’s ambassador to Malaysia.

It’s a bad time to be Pyongyang’s top envoy in Kuala Lumpur. With North Korea adamantly refusing to admit that the North Korean citizen killed in Kuala Lumpur International Airport last week was their leader’s half brother - and denying their involvement in the killing even more - Ambassador Kang is tasked with transmitting some difficult messages from leader Kim Jong-un: Halt the autopsy of Kim Jong-nam and give us back the corpse. And stop "colluding and playing into the gallery of external forces," which means South Korea.

When Ko saw Kang on television Monday evening, reading out North Korea’s bellicose statement during a press conference in front of the North Korean Embassy in Kuala Lumpur, he couldn’t help but notice how emotionally charged Kang had seemed.

Ko could tell that Kang had a lot riding on his performance.

“He was so gentle,” recalled Ko. “But in the press conference, he kept patting his face with a handkerchief; I don’t think it was the weather.”

If Kang fails to steer events in Malaysia in a way Pyongyang wishes, “He will die,” Ko said.

But in a country where 340 people were executed over the past five years by Kim Jong-un, more than twice the average number executed in previous years according to a report by the Institute for National Security Strategy, it remains unclear what fate awaits him.

Kang’s predecessor in Kuala Lumpur is an object lesson in terror in the foreign service. He was Jang Yong-chol, a cousin of Kim Jong-un and nephew of Jang Song-thaek, political mentor and protector of Kim Jong-un. That powerful uncle was executed for treason in December 2013, allegedly killed by an antiaircraft machine gun. His nephew was recalled to Pyongyang around the time and also executed.