From tallest mountains to biggest lake

From tallest mountains to biggest lake 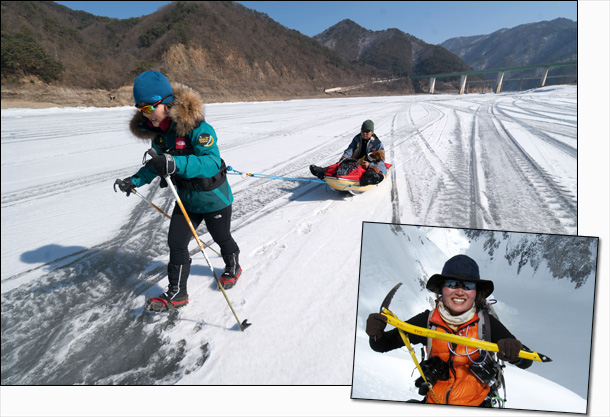 Kim Yeong-mi climbs the 13th tallest peak in the world, Gasherbrum II (26,362 feet), in 2008. She conquered it on her fifth attempt. Now she is currently taking on the frozen surface of Lake Baikal. She will brave minus 22 Fahrenheit temperatures on her 25-day expedition. [YOUNGONE HOLDINGS]

Lake Baikal is the world’s deepest and oldest lake and the largest freshwater lake in the world by volume. One Korean woman is on an expedition to brave the Siberian winds and traverse the frozen surface of Lake Baikal.

Bivouac refers to camping out without cover. Kim is going from the vertical realm of the world’s highest peaks to the flat icy tundra of the north. Kim started the expedition on Feb. 17, the first for a Korean.

Lake Baikal is in the southeast of Siberia. It is 636 kilometers (395 miles) long and, at this time of year, the temperature is negative 30 degrees Celsius. Bone-biting winds make it feel much colder.

Because of the vigorous winds, tents must be screwed into the ice. When climbing Vinson Massif (4,892 meters) in 2004, Kim endured temperatures of negative 37 degrees Celsius (negative 35 degrees Fahrenheit).

Kim will travel by sled, with around 90 kilograms of baggage and provisions, advancing around 30 kilometers a day throughout the 25 day expedition. Kim will use crampons, skis and snowshoes through the journey.

“There was snow up to the waist,” one Russian who made a similar journey last year wrote in his travel log. Unlike the Himalayan expedition, where the routes are established, Kim must find her own way on Lake Baikal.

There is no way to get supplies in the middle of the expedition. Because everything freezes in the intense cold, it is impossible to cook rice or ramen.

To reduce the weight of her load, Kim freeze dried many provisions.

The plan is to begin the day at 7 a.m., and excepting three hours for camping and decamping, Kim will spend the rest of the time travelling.

Her greatest concern is constipation. Kim’s preliminary training includes “eating regularly and going to the bathroom.”

“I’ll have to walk alone and talk alone, I guess,” said Kim. There are legends of solo travelers in extreme circumstances seeing apparitions and exchanging conversations with them.

“I believe those stories, and in extreme loneliness, I may start chatting with another me,” Kim said. “I am waiting for that moment when I’m drinking coffee after pitching a tent, gazing at the stars above Baikal.”

The expedition is more than a mere testing of mettle in the Siberian tundra. When Kim partook in the Seven Summits, she had a mentor in Park Young-seok, the first person in the world to complete the True Explorers Grand Slam, which refers to climbing all 14 peaks in the world above 8,000 meters as well as reaching the North and South poles. Park and two others lost their lives while scaling Annapurna in the Himalayas in 2011.

“I am a scholarship student of Park Young-seok. [He] supported my costs for the climbing of the Seven Summits,” said Kim. “I will give it my all.”