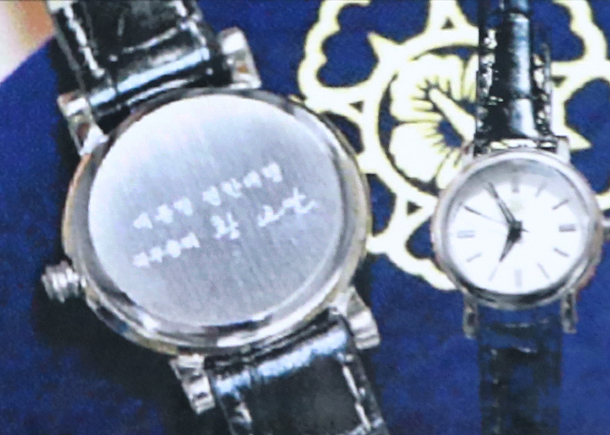 A viral photo of the watches inscribed with “Acting President and Prime Minister Hwang Kyo-ahn.” [YONHAP]

The controversy sparked after a photo of the watches, which have “Acting President and Prime Minister Hwang Kyo-ahn” written on them, went viral online.

The parties claimed the move can be seen as reflecting Hwang’s presidential ambitions. The acting president has not yet expressed a plan to run in the upcoming election, but has been the front-runner in local opinion polls among conservative hopefuls.

“(Hwang) should focus on his duty as the prime minister and the acting president,” Rep. Park Jie-won, head of the People’s Party said. “If he wishes to become a presidential candidate, he should promptly resign.”

The lawmaker said Goh Kun, who was the acting president in 2004 after the impeachment of late former president Roh Moo-hyun, did not make such souvenirs.

“Hwang should not play like the president and should instead focus on improving the lives of the people,” Rep. Ha Tae-keung of the Bareun Party said. “The watch should not have been made. It is commemorating the impeachment of the president as well as the national tragedy.”

Hwang’s office said it produced the watch in December after it ran out of previous models with the prime minister’s title inscribed. The office said the watches are used as gifts for limited occasions, and that it is customary to use the formal title.