Cutting off the airflow

Cutting off the airflow 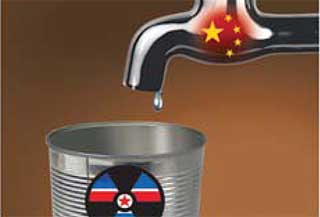 Using this pipeline, which crosses the Yalu River, the North brings in China’s crude oil and refines it at the chemical factory for the uses of the military, transportation and power generation. An annual average of 500,000 tons is supplied since 2000, and the amount is about 95 percent of the North’s total petroleum consumption.

The North makes up for the rest with oil from Russia and smuggled oils. About 200,000 tons of petroleum products, not crude oil, are imported annually. Compared to South Korea’s 110 million tons of oil consumption in 2015, the numbers show the seriousness of the North’s “oil famine.” At the markets in the North, oil and oil-based products are being briskly traded, which were smuggled out from the military, state transportation offices and power plants and petroleum products.

Liquefied petroleum gas (LPG), which has more fire power than coal and wood but does not produce smoke, is particularly popular. LPG is produced with crude oil from China. In order to move a tank, fly a military plane, fire a missile, move troops, ship agricultural and industrial products to consumers and allow the people to live, the North is completely dependent on China’s oil supply. Without oil, it cannot fight a war.

China’s oil is like a dying patient’s oxygen mask, and that patient is North Korea. Kim Kyung-sool, a senior researcher of the Korea Energy Economics Institute, gave a very detailed explanation. “The North will not even last a few days if China turns off the pipeline, as it is relying 100 percent on China’s crude oil and 90 percent on petroleum products. The national system will collapse immediately and the entire society will panic,” he said.

China’s cutting the oil connection is the only shortcut to break the recalcitrant Kim Jong-un. We and China know the answer. The problem is that China does not use this card. China opposes the North’s nuclear arms program and China is enraged by Kim’s assassination of his China-friendly uncle and half brother, once protected by Beijing. However, China does not cut the pipeline. Why is that?

Professor Lee Hee-ok of Sungkyunkwan University, a China expert, said the outcome would be too grave. “Once the pipeline is turned off, restoration is difficult. China only uses such an option as the last resort, when it sees that its core interest was infringed on. The pipeline is a strategic card, and using it now would be using a strategic card tactically.”

According to Kim, oil from Daqing is rich in paraffin. If the oil does not flow, hardened paraffin will be stuck in the pipeline. In order to reuse the pipeline, paraffin should be melted down. The process means time. China, therefore, leaves the pipeline as a final option. A measure before using this is China’s decision to stop importing North Korean coal. Coal accounts for 40 percent of North Korea’s export, and it is clearly a serious blow to the North. For China, it is an unprecedented move to implement the UN Security Council resolution 2321 to sanction the North.

According to the UN Security Council’s resolution, the North’s ceiling limit to export coal for this year is 7.5 million tons, worth about $400 million.

China must pay special attention to the uneasiness in Washington. The North’s test-firing of a ballistic missile with solid fuel from a mobile launcher on Feb. 12 was an extreme provocation to the United States. U.S. President Donald Trump calls the issue a “very, very high priority.” The U.S. Congress is also urging stronger measures on the North day after day. Among the considered measures is a preemptive strike on the North’s nuclear and missile facilities. Kim’s madness and Trump’s wildness are now on a collision path.

How much more madness from Kim, who cannot think normally, is needed for China to use its final option? The United States’ concern for the Pukguksong-2 missile is reasonable. If the North takes one more step forward, it is only a matter of time before it will have inter-continental ballistic missiles with a range of more than 10,000 kilometers, which is enough to reach the U.S. mainland. The neo-neo-conservatives of the Trump administration, therefore, are seriously considering a preemptive strike on the North.

A preemptive strike means war. China, instead of complaining about the deployment plan of the Terminal High Altitude Area Defense system, should cut off the oil pipeline. It must give the North an ultimatum first. If the North does not freeze its nuclear and missile programs within three to six months, China ought to reduce the oil supply to the North by 50,000 tons to 100,000 tons a month. If the North still continues its nuclear and missile provocations, China should completely shut the pipeline down.
JoongAng Ilbo, Feb. 24, Page 31.