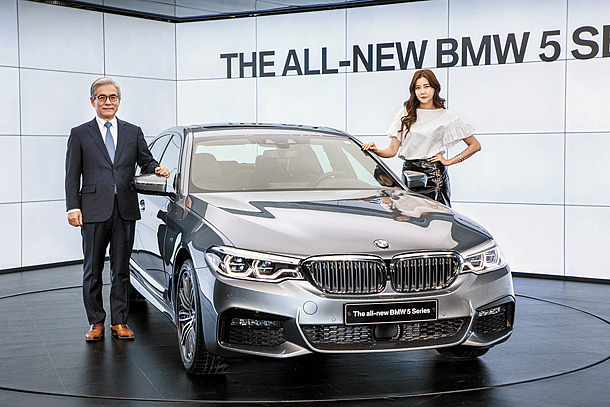 
BMW is banking on a full overhaul of its 5 Series to retake the top spot in Korea’s import car market from rival Mercedes-Benz.

With basic options exclusive to Korea and autonomous car technology, the seventh generation of the German automaker’s 5 Series is expected to pose a strong fight in Korea’s premium midsize sedan market.

The 5 Series is one of BMW’s most popular models, selling more than 7.6 million units globally since it was launched in 1972.

“BMW Korea plans to sell more than 20,000 units of the new 5 Series this year,” BMW Korea CEO Kim Hyo-joon said during a launch event on Tuesday in southern Seoul.

The overhauled 5 Series inherits the signature kidney grille on the front, touching the headlights on both sides to give it an extended and sharper look.

The car’s body has gotten bigger - by 29 millimeters (1 inch) in length, 8 millimeters in width and 15 millimeters in height, to be precise - but it’s also lighter by as much as 115 kilograms (250 pounds).

This makes the latest 520d both bigger and lighter than Mercedes-Benz’s newest E-Class 220d.

BMW Korea has put the M Sport Package option on all trims of the 5 Series, an exclusive offering to Korean consumers, who according to the company has shown one of the top demands for the premium option.

The M Sport Package provides a sportier body kit on the exterior, with a larger front and side air-intake. Its rear face adopts a more aggressive look with square-shaped tailpipes. The premium option also lowers the body of the car, giving it a more sports sedan-like demeanor.

Generally, the M Sport option comes with an additional price tag of 10 million won ($8,840). But since the seventh-generation 5 Series’ price is only 1.7 million to 3 million won higher than the previous-generation model, the kit won’t break the bank too much.

The Korea JoongAng Daily took the 520d model equipped with a four-cylinder twin turbo diesel engine on a 130-kilometer drive from the Parnas Tower in southern Seoul to the BMW Group Driving Center on Tuesday.

As expected, the vehicle offered a smooth and quiet ride despite running on a diesel engine. The acceleration was fast and stable, so much so that it was hard to notice the car was going faster than 100 kilometers an hour (62 miles per hour). And because of its lighter weight, cornering on the winding course felt more agile and controllable.

The car’s stop-and-go function, which completely turns the engine off at stop status with the driver’s foot pressed on the brake pedal, didn’t come as a hindrance; it was neither noisy nor unstable.

The 520d model is a basic trim but offers an impressive set of self-driving technology. It vibrated and suspended the steering wheel’s movement when the car was getting out of the lane.

BMW Korea explained that while before, the function merely sent a warning alarm in inadvisable situations on the road, the latest 5 Series is equipped with more advanced technology that is able to interfere with driving to prevent a worst-case scenario. For instance, the car will stop on its own when the distance with the vehicle in front narrows to a dangerous level. When the car behind it is considered too close, the BMW will automatically flicker the rear emergency light, the seat belt will tighten on its own and the window will close in case of collisions.

The option, which generally costs 3 million won, is installed in all model levels. Mercedes-Benz’s comparable E-Class 220d model has no such basic equipment.