Rallies for and against president intensify

Rallies for and against president intensify 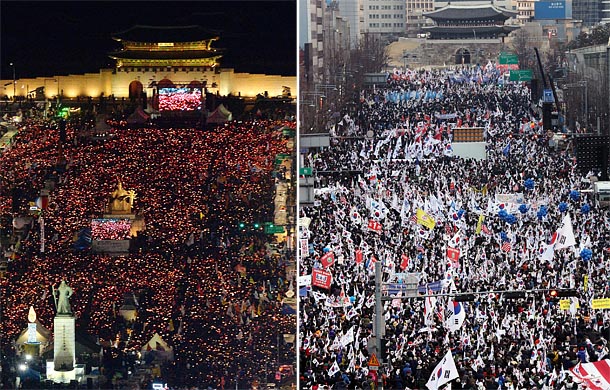 On Saturday, which marks the fourth anniversary of President Park Geun-hye’s inauguration, a pro-Park rally (right) gathers earlier in the day and an anti-Park rally (left) gathers later on, both in central Seoul. [YONHAP]

The country saw a deep internal division Saturday as tens of thousands nationwide who are for and against President Park Geun-hye took to the streets as the Constitutional Court is nearing its verdict in the decision to remove her from office.

Pro-Park supporters held what it claimed was the largest rally since the Choi-gate scandal erupted in October on Saturday in front of Seoul City Hall, with participants waving national flags in display of their unwavering support for the president.

Countering the pro-Park rally, those calling for the Constitutional Court’s sweeping decision to remove Park from office held their 17th weekly rally at Gwanghwamun Square at 6 p.m., just 870 meters (0.5 miles) from where ardent Park supporters organized their rally four hours earlier. The anti-Park rally organizer estimated a million people joined the rally to deliver their message to the court that the president ought to be forced out of office.

Reflecting on the prospect that the Constitutional Court is about to deliver its verdict after its final hearing today, tensions at each rally were palpable.

“I can’t fall asleep without coming out here for the rally,” said Lee Sang-il, who told the JoongAng Sunday that he came from Sokcho, Gangwon, for the pro-Park rally, where Park supporters held up national flags along with American flags, to underscore their belief that the removal of Park would undermine the bilateral alliance.

“I didn’t come here for personal stake but for the sake of the future generation,” added the 57-year-old.

Fueling the ardent pro-Park sentiment, a number of politicians from the ruling Liberty Korea Party stood on stage and addressed the audience, accusing the candlelight rally of being engineered by “pro-North Korea figures” and claiming the independent counsel’s investigation into the Choi scandal was “fabricated.”

“We should never forget the fact that investigations by prosecutors and an independent counsel are fabricated!” cried Rep. Kim Jin-tae of the LKP before the crowds, who went on to say the National Assembly “should be dissolved” for its Dec. 9 passage of the impeachment motion.

Likewise, Cho Won-jin, also a ruling party lawmaker, proclaimed on the stage, “We should never forget we must protect President Park, who is married to the nation. We should also not forget all these false rumors and propaganda spread by dishonest and manipulative media.”

Like Kim and Choi, ruling party lawmakers allege that the independent counsel and the prosecution both carried out an unfair and fabricated probe into the unprecedented abuse of power and bribery scandal that led to Park’s impeachment, though they have yet to provide evidence to back up the charge.

At the candlelight rally in Gwanghwamun Square, protesters chanted “Out with Park!” and demanded that acting President Hwang Kyo-ahn accept the independent counsel’s request to extend its investigation by 30 days amid growing speculation that Hwang, Park’s appointee, will turn it down. Independent counsel Park Young-soo’s probe ends on Tuesday.

Amid speculation that President Park may opt to resign voluntarily before the court’s verdict, Moon said Saturday in an interview with cable broadcaster MBN that the Constitutional Court should continue its proceedings even if Park volunteered to resign.

While Moon indicated he would accept the court’s decision, Seongnam Mayor Lee maintained that he would only accept a court’s decision if it decides to oust Park. “If the court refuses to accept the motion to remove Park, whom the people already dismissed, I will stand shoulder to shoulder with the people to fight all the way till the end to remove her from power,” said the mayor.

With growing anticipation that the court will deliver the verdict by March 13, when Justice Lee Jung-mi is scheduled to step down, whether presidential hopefuls will accept the court’s decision has become a major point of friction.

Among those who stated their unconditional acceptance of the court’s ruling are Rep. Ahn Cheol-soo of the People’s Party and Rep. Yoo Seong-min of the Bareun Party. Contrary to the DP runners, the two have avoided joining weekly rallies, saying the matter is now in the hands of the court and no pressure should be put upon it.

Governor An is maintaining what many see as an ambivalent stance, saying it would be “hard” for him to respect the court’s ruling, if it rejects the motion, given public sentiment.

While political heavyweights differed on how they will respond, former elderly statesmen stressed the importance of respecting the rule of law.

“The core element at the heart of our democracy,” said Song Bok, an emeritus professor of Yonsei University, “which we have protected and nurtured since the liberation [in 1945], is the spirit of the rule of law. One’s claim to disavow the Constitutional Court’s decision is no different from proclaiming that he or she will go back to a dynastic era when there was only rule of man.”

Lee She-yoon, a former Constitutional Court justice, agreed, saying, “The court’s decision must be respected no matter what. Any backlash and commotion against it will mark a retreat of civilization in this country.”

Meanwhile, Park’s legal defense team said on Sunday President Park will not attend closing arguments scheduled today. She is expected to state her position in a written statement to the court today instead.

Over the past months, the Constitutional Court held a series of hearings to decide whether to remove her permanently from office. The judges are expected to take about two weeks following today’s closing arguments to deliberate before announcing a ruling.