Yun to speak at UN rights council about nerve agent

Yun to speak at UN rights council about nerve agent 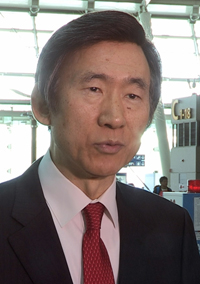 South Korean Foreign Minister Yun Byung-se is set to address the grave rights situation in North Korea following the assassination of Kim Jong-nam, half brother of the regime’s leader, at the UN Human Rights Council and an international disarmament conference in Geneva over Monday and Tuesday.

“North Korea’s human rights situation and its violation of various international norms is at a serious level,” Yun told reporters arriving in Switzerland on Sunday, adding that his “aim is to publicize this and lead a sterner response from the international community than ever before.”

Yun was scheduled to give a keynote address at the high-level meeting of the UN Human Rights Council on Monday, and speak at the 65-member Conference on Disarmament the following day.

“The gravity of Kim Jong-nam’s murder is at a different level than before,” said Yun, which is why he said he would speak on this issue, noting the undertone set previously by the Human Rights Council, UN General Assembly and Security Council.

On the VX nerve agent, Yun said, “If North Korea is ultimately confirmed to have used [VX], this is a very serious violation of international law.”

At the disarmament talks, Yun said he will emphasize that VX “is a prohibited chemical weapon” and that its use in killing Kim violates Malaysia’s sovereignty and international norms, urging a stern response from the conference.

Both Malaysia and North Korea are also members of the UN Office at Geneva’s Conference on Disarmament, which was established in 1979. North Korea, however, is not a signatory to the Chemical Weapons Convention, which bans the use of VX.

This is the second consecutive year that Yun is attending these conferences. He referred to Pyongyang as a “human rights black hole” in his speech last year at the Human Rights Council, calling upon accountability for the rights abuses.

Seoul initially intended to send a vice foreign minister to attend the sessions of the Human Rights Council and disarmament conference this year, but Yun attended instead following Kim’s shocking murder.

Taking into consideration North Korea’s nuclear and missile provocations and human rights situation, which has arrived at a stage where the “international community has to take action,” Yun said that the Human Rights Council and Conference on Disarmament “comes at an incredibly important timing.”

In March 2014, the Human Rights Council adopted a resolution based on the recommendation of a landmark report published in February that year by the UN Commission of Inquiry on the human rights situation in North Korea.

Yun then heads to Spain on March 1, following his tour of other European countries including Romania and the United Kingdom, and will also address the North Korea issue to his Spanish counterpart Alfonso Dastis during bilateral talks as he gains broader consensus for strong measures against Pyongyang.