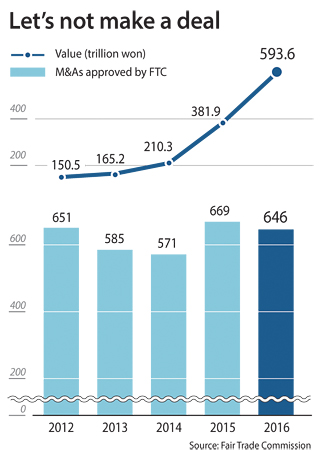 But aside from the high-profile Samsung acquisition, there wasn’t much other M&A activity last year. In fact, there were fewer mergers and acquisitions in 2016 than 2015, according to a study released Tuesday by the Fair Trade Commission, Korea’s antitrust agency. It’s the first drop in M&As in two years as companies have held back from expanding their businesses amid slow economic growth and uncertain market conditions.

Large businesses especially were less aggressive in their M&A shopping, against a backdrop of controversy and scandal. Leading Korean conglomerates from Samsung and Hyundai to Lotte and Hanwha were accused of receiving political favors from President Park Geun-hye’s administration in exchange for donations to her secretive confidante Choi Soon-sil.

Last year, the Fair Trade Commission approved 646 mergers and acquisitions, a 3.4 percent drop or 23 fewer than the previous year. The value of the M&As surged 55 percent to 593.6 trillion won ($522.4 billion) from 381.9 trillion won a year earlier, though this was largely from M&As of Korean companies initiated by foreign companies.

M&As by Korean companies actually shrank in both number and value last year. The number of M&As last year fell 8 percent to 490 from 534. By value, it halved to 26.3 trillion won from 56.3 trillion won.

“The number of M&As by Korean companies, including for internal restructuring, was less aggressive,” said Han Yong-ho, an official at the Fair Trade Commission. “The reduction was especially visible in the manufacturing industry than in services.”

Some of the Korean M&As included mergers of conglomerate affiliates as part of corporate restructuring. The number of these mergers fell 12.1 percent to 167 from 190, while the value plummeted 84.3 percent to 4.4 trillion won from 28 trillion won.

M&As by conglomerates especially saw a significant decline last year. The number of M&As by companies with assets of 5 trillion won or more fell 18.6 percent to 122 from 150, while the value dropped 58 percent to 11.1 trillion won.

Since the third quarter, the category of conglomerate was changed to encompass companies with more than 10 trillion won in assets, but for the sake of statistical consistency, the Fair Trade Commission applied the 5 trillion won standard for this M&A report.

“In 2015, there were several cases of mergers among affiliates that were valued at more than 1 trillion won, but last year, there were only two such cases,” Han said.

In 2015, there were five high-profile mergers of conglomerate affiliates valued at more than 1 trillion won including the merger of Samsung C&T with Cheil Industries, SKC&C with SK and Hyundai Steel with Hyundai Hysco.

Last year, there were only two mergers including a deal between Lotte Chemical and SDI Chemical worth 2.8 trillion won.

One noticeable trend in the local M&A market is aggressive Chinese acquisition of Korean tech companies. Chinese investors have been increasing their investments in Korean entertainment and game companies as Korean pop culture is becoming increasingly popular in China.