Indie counsel runs out of time, passes case on

Indie counsel runs out of time, passes case on 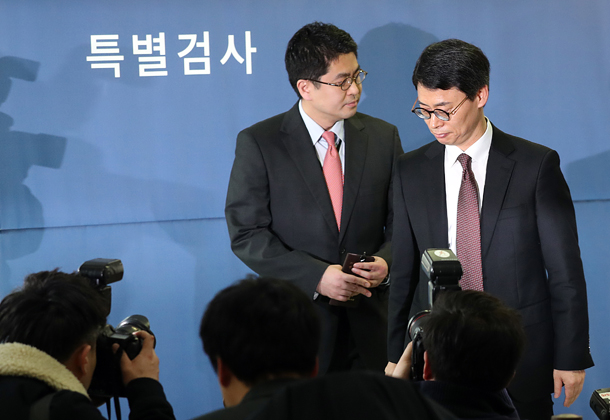 President Park Geun-hye will be identified as a suspect in a bribery case involving her friend and Samsung Group for further investigation by the prosecution, a spokesman for an independent counsel team said Tuesday as it wrapped up its special probe.

Following an investigation by the prosecution into the abuse of power and influence-peddling scandal involving the president, her associates and conglomerates, the National Assembly launched an independent counsel probe to go after President Park. The team’s request for a 30-day extension was rejected Monday by Prime Minister Hwang Kyo-ahn, who has been serving as the acting president since President Park’s impeachment in December, forcing the investigators to wrap up with some leads not followed.

“Park will be named as a suspect and the case will be immediately handed over to the prosecution [to continue investigating],” assistant Independent counsel Lee said in his last press briefing Tuesday.

Last week, the team considered leaving the case open and deferring a decision on whether to indict Park, who has presidential immunity, so that an investigation and the subsequent indictment process could resume after her presidency ends. But after internal discussion, the team decided to identify her as a suspect and requested the prosecution pick up the probe.

Park was named as a co-conspirator in her associates’ alleged extortion of money from conglomerates by prosecutors last year. She faced eight charges by the prosecution after its probe, and can be indicted after she leaves the presidency. The independent counsel will add three new charges, including bribery.

Seven others will be prosecuted on charges of creating a blacklist of artists critical of the administration. Eight will be indicted on charges of allowing the unjustified admission of Chung Yoo-ra, daughter of Park’s friend Choi Soon-sil, to Ewha Womans’ University. Seven will be indicted on charges of providing illicit medical treatments to President Park. The independent counsel, however, decided not to prosecute Woo Byung-woo, former civil affairs aide of the Blue House. But the team said the prosecution should investigate him further and indict him.