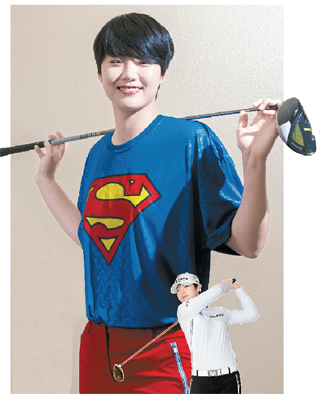 In 2016, Park was invited to play in seven LPGA tour events and earned 800 million won ($682,825), putting her 25th on the LPGA tour money list. Since she was ranked within the top 40, she was able to receive full-time status on the LPGA tour for the 2017 season without having to qualify.

Park started golfing when she was in second grade. During practice, she tries not to talk a lot so that she can to focus on golf.

Park is the LPGA tour’s super-rookie, as she is ranked 11th in the Rolex World Ranking and dominated the KLPGA tour in 2016 by winning the lowest scoring average, 69.64, and the most number of wins in a season, seven. During her time on the KLPGA tour in 2016, Park led in various categories, including average driving distance, 265.59 meters (270 yards), and greens in regulation, 79.72 percent. Park was also ranked 5th in average putts with 29.81.

“I am well aware that the fans have high expectations for me this year because I had good results last year on the KLPGA tour,” Park said. “My goal this year on the LPGA tour is to win a tournament and become the rookie of the year.”

To prepare for her rookie season on the LPGA tour, she left to Orlando, Florida, in December for off-season training. For an easier transition onto the tour, Park recruited a new coach, Brian Mogg.

Mogg is a familiar name to Korean fans, as he coached Korean golfers such as Yang Yong-eun, Kim Mi-hyun and Yang Hee-young, also known as Amy Yang. Park also changed her clubs to Taylormade.

“The changes required me to practice a lot more,” Park said. “I went out to the course early in the morning to hit balls on the range and practice short game. After, I played a practice round and by the time I was done with weight training, it was already 9 p.m.”

While she is known for her long drive, Park believes she still needs to improve on her short game. When she played the LPGA tour events last year, she struggled the most with playing in different types of grass.

“My long game was as good as other players on the LPGA tour,” she said, “but I lacked in experience and short game.”

Although Park is making her debut on the LPGA tour later than other players, she said it helped her prepare for the season more because she got more time to practice. Not only is this Park’s LPGA tour debut, this is also her first tournament since the KLPGA’s Phantom Classic with YTN in November.

“From a successful off-season training, I also have high expectations for this season,” Park said. “I can’t wait to play.”

Park will tee off at 10 a.m., local time, today with fellow Korean Chun In-gee and Ariya Jutanugarn of Thailand.