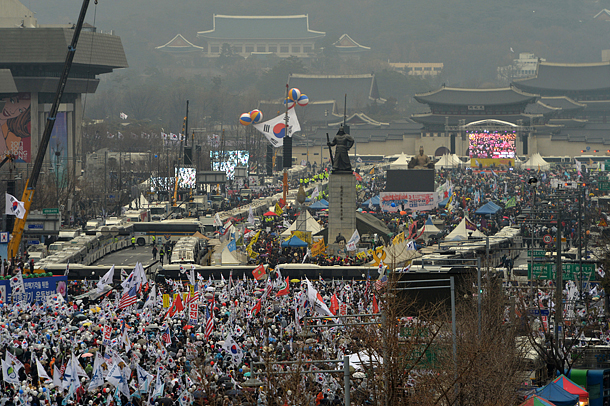 Pro-Park Geun-hye supporters, bottom left, stage a massive rally on Wednesday in front of a police bus barricade while anti-Park protesters gather on the other side in Gwanghwamun Square in central Seoul. Police parked buses as a barricade to separate the two rallies to prevent any clash between two groups. [YONHAP]

The streets of central Seoul were flooded with people on the national holiday to commemorate the country’s independence movement nearly a century ago - but they were more divided than united.

From early morning hours to around 5 p.m., the streets around Seoul Plaza were filled with people holding up Korean national flags, chanting “Stop impeachment!”

They marched from the Saejongdaero intersection toward Sungnyemun Gate, the Blue House and the Constitutional Court, and gathered back at the intersection around 4 p.m. to continue the rally.

From 5 p.m. to later into the night, a different group gathered in Gwanghwamun Square, calling for the president, impeached over a corruption scandal involving her inner circle and longtime friend Choi Soon-sil, to step down immediately. Park was impeached by the National Assembly in December and awaits a final judgment on her fate by the Constitutional Court. They marched toward the Blue House from 7 p.m.

The two rallies’ centers - the Saejongdaero intersection and Gwanghwamun Square - were divided by some 20 police buses. Police used 100 buses to circle the Gwanghwamun Square. Some 16,000 police officers were dispatched to the scene. Rally organizers said there were over 1 million people gathered on each side.

Participants in the anti-Park rally included supporters of victims of the sinking of the Sewol ferry in April 2014. In her impeachment motion, Park was accused of responsibility for the botched government response to the sinking that killed 304 people.

They fastened yellow ribbons, symbols of supporters of the Sewol victims, to the Korean flags they were waving in commemoration of the independence movement. The ribbons were meant to differentiate them from the pro-Park rallies, known for their profligate use of Korean national flags.

Protesters withstood the rain as they held up their candles and chanted together with a speaker on stage. “The Constitutional Court must remove Park!” they shouted. “The candlelight will not go out until the judgement day and we will stand for justice!”

They called for a swift ruling from the Constitutional Court to remove Park from office for the Sewol tragedy, allowing an inner circle to run her government, blacklisting entertainers they disapproved of, and strong-arming millions of dollars in donations from business groups in return for government favors.

The pro-Park forces that took to the streets on Wednesday also remained firm in their beliefs that pro-North Korea forces were behind the impeachment.

“Those who are calling for the removal of Park are in actuality calling for the country to be overhauled by pro-North Korea forces,” said Yoon Gwang-woong, a resident of Seocho District, southern Seoul. “We must preserve the country from falling into the hands of the liberal opposition parties.”

Those opposed to the president’s removal, often advanced in age, have accused the candlelight vigils of being engineered by “commies” and “reds,” terms used in the country to denote North Korea sympathizers.

Some refused to believe reports about Choi Soon-sil, the presidential friend indicted for abuse of power and influence peddling.

“I believe the president was unfairly impeached,” said a 64-year-old resident of Daegu surnamed Jeong. “Even if what they say Choi did is true, I don’t think the president has to be impeached over it.”

Politicians were equally divided at the rallies.

Presidential frontrunner and former head of the Democratic Party Moon Jae-in and Seongnam Mayor Lee Jae-myung, another presidential hopeful, have not missed a single anti-Park rally from their commencement in October. The rally on Wednesday was the 18th.

“The Democratic Party and I will continue to light candles against the deep-rooted evils of this age,” Moon tweeted on Wednesday. “Justice delayed is justice denied.”

He also told a crowd gathered in front of the historical jailhouse of Seodaemun in western Seoul, “We hope that in commemorating the independence movement of the country, we will renew our resolve to change the administration and bring true democracy to the country.”

“I will be with the people of the candlelight vigils until the end,” Lee said.

Lawmakers calling for the cancellation of Park’s impeachment were also vocal at the rallies.

“I will fight to the end with the people against the illegal impeachment of the president,” former Gyeonggi Gov. Kim Moon-soo, a member of the Liberty Korea Party and a presidential hopeful, told a crowd gathered in Cheonggye Plaza in central Seoul.

Other presidential hopefuls, South Chungcheong Gov. An Hee-jung, former head of the People’s Party Ahn Cheol-soo, Yoo Seung-min of the Bareun Party and Gyeonggi Gov. Nam Kyung-pil, did not partake in the rallies, criticizing the political divide that they illustrated.

“This is not a time to use the country’s flag as a means to divide the country in two,” Ahn said during a visit to the Ahn Jung Geun Memorial Museum in central Seoul. “The leaders of this country must unite.”

“What the people want is not division and conflict but peace and cooperation,” Nam said.

But as the country awaits the Constitutional Court’s judgment on Park, the division visible at the rallies is also being felt in homes and among friends.

“No matter how much I try to tell my father my own logical interpretation of events, it has not worked,” said a 54-year-old surnamed Seo. “He is pro-Park and calls Moon Jae-in and Seoul Mayor Park Won-soon commies. He simply refuses to listen.”

“I recently got into a disagreement on Facebook with a colleague at school,” said a 26-year-old college student surnamed Kim. “He wrote something on his page that was critical of the candlelight vigils against Park. I criticized his view, and he criticized mine, and we got into a fight. I deleted my account in the end.”

A noodle restaurant owner who hung an advertisement that said, “Menus on discount until impeachment is approved,” said he was harassed by Park supporters.

“I received hundreds of calls from Park supporters threatening me after I put up that sign,” said the 52-year-old owner.

Experts advised people to find some common ground in their conversations.

“The truth is, both sides are arguing for the sake of the country,” said Park Il-joon, head of a civic group promoting conflict resolution in society. “It helps to acknowledge that people have different views and that they respect these different perspectives.”