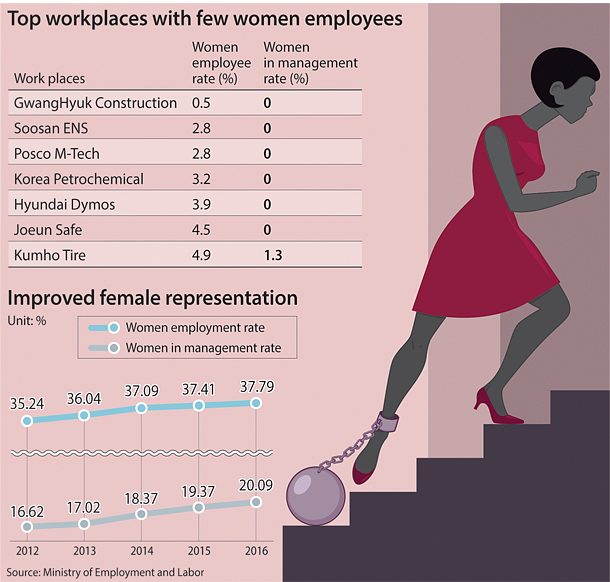 The government on Thursday named 27 companies, including one public institution, with exceptionally low numbers of female employees or few to no women in management.

Kumho Tire was one of the high-profile companies that made the list along with Meritz Securities and Soongsil University.

These companies violated the affirmative action act adopted in 2006 to increase hiring while correcting discriminatory practices against women, the Ministry of Employment and Labor said.

The companies failed to meet even 70 percent of their sector’s national average in female hiring or management rate in the last three years.

The lists also included companies that have been warned to hire or promote more women yet failed to follow through.

“We have selected workplaces that we saw had little or no will in improving in hiring or promoting women, including creating an environment so that they could work and equally raise a family,” said Moon Ki-seop, the ministry’s employment policy officer.

Tire manufacturer Kumho Tire had the sixth smallest rate of female employees. Among the 5,042 employees, just 247 or 4.9 percent were women. Only four of the 315 management were women or 1.3 percent.

Other high-profile companies included Meritz, which has more than 1,300 employees. While it has a higher rate of female employees than Kumho Tire with 23.8 percent or 330 female workers, it had a low percentage of women in management. Of the 105 in management, two women were promoted to that status or 1.9 percent.

Among the 27 companies, 63 percent or 17 companies had no female managers.

GwangHyk Construction led the list of male-dominated firms. The construction company, which has more than 1,400 employees, has only seven women or 0.5 percent while none among the 27 in management.

It has been more than a decade since the government implemented the affirmative action act for public companies and private workplaces with more than 500 employees to hire and promote more women.

The government has been ramping up campaigns encouraging more companies to hire women whose careers were interrupted due to marriage or child-raising as the dwindling workforce is taking a toll on the nation’s economic growth.

The number of women in the workforce has grown steadily in the last five years. The female employment rate rose from 35.24 percent in 2012 to 37.79 percent last year. The rate of women in management also improved, from 16.62 percent to 20.09 percent in 2016.