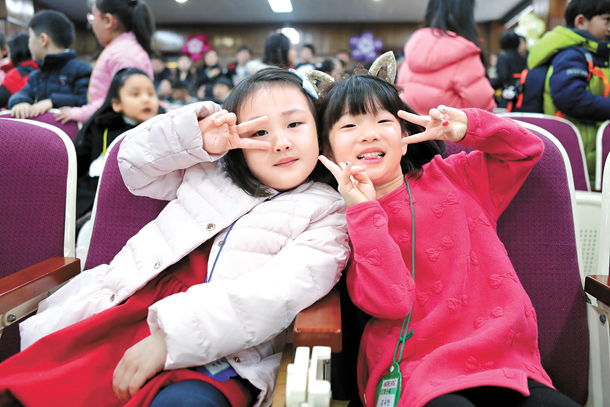 Kim Kyu-yeon, left, and Lee Chae-yi become friends at Daedong Elementary School’s entrance ceremony on Thursday in western Seoul. Some 55 percent of students at the school are multiethnic, the highest population ratio among schools in Seoul. [JEONG HYEON-JIN]

Daedong Elementary School in Daerim-dong, western Seoul, celebrated the start of school on Thursday, where multiethnic students make up more than half the student body.

The screen on stage showed the greetings in Chinese characters. Posters throughout the school welcoming the students were also written in Chinese.

In this entrance ceremony, 37 out of 73 students were multiethnic students. They are children of Chinese and Chinese Koreans, as well as other multiethnic families who are working in Korea. Considering the parents and students who are unfamiliar with Korean, the school decided to translate Korean into Chinese on the screen.

Moon Seong-sil, grandfather of a student at the school, is a Chinese Korean who is from Heilongjiang Province in China.

“I appreciate the school’s consideration,” he said. His family leased a house near the school for their child to enter Daedong Elementary School. “In the Chinese community, this school is well known for teaching students without discrimination,” Moon said. “People come from afar to enroll their children into this school.”

Yeongdeungpo District in western Seoul has the highest number of Chinese multiethnic families. Chinese store signs are easily spotted in the narrow streets of the school.

“Many students come to the school in the middle of the semester,” Principal Kang said. “Some of the transfer students cannot speak Korean, at all.” There are two to three of these students in every class.

Since 2014, Daedong started special education for multiethnic students who are unfamiliar with Korean. The school runs Korean classes and hires bilingual teachers who can speak both Korean and Chinese.

Korean parents used to avoid sending their kids to Daedong Elementary School. However, after the multiethnic student supporting program, parents changed their mind. They especially liked Chinese language classes and Chinese cultural experiences. Thirteen times a year, these classes are offered for all students. From this year, the school plans to open and extend Korean, Chinese and English classes.

“I learned Chinese in school, so I can speak basic Chinese” Han Seul-gi, a sixth grader at the school, said. “I am talking with Chinese people on street without fear.”

“People may think Chinese multiethnic families have low income and are not interested in education,” said Heo Gong-yeol, father of a sixth grader at the school, “but in fact, they are more involved than Korean mothers in school and education.”