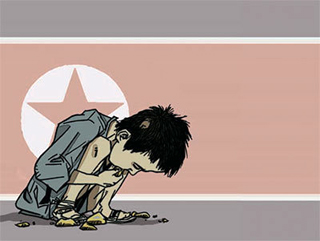 The North Korean regime demonstrated to the world how savage and cruel it can be in February. International groups reported to the United Nations Committee on Rights of the Child in early February that students and other children in North Korea were being forced by government officers to perform labor on behalf of the state.

Two teenagers who fled the country testified that they were forced into hard labor like farming and construction work while at school. The state also makes children who finish their mandatory school at age 16 or 17 join forced labor brigades that are militaristic in structure, where they work primarily on construction projects.

On Feb. 13, Kim Jong-nam, half brother of North Korean leader Kim Jong-un, was assassinated in broad daylight in an international airport in Malaysia. He was killed with a VX nerve agent, which has a toxicity 100 times stronger than sarin gas. The investigations by the Malaysian police currently back many experts’ claims that Pyongyang planned and orchestrated the murder.

The world has been appalled by the extent of the brutality of the young leader who can order his subordinates to kill an elder brother in exile who posed little threat, following the execution of his once mentor and uncle, Jang Song-thaek. If Kim and North Korean officials were able to callously kill royal family members, imagine how merciless they can be to common citizens.

In August last year, Tomas Ojea Quintana, an Argentine human rights lawyer with more than 20 years of experience who served as the Special Rapporteur on situation of human rights in Myanmar, was named to oversee North Korean situation. The UN Human Rights Council in 2013 then established a Commission of Inquiry on Human Rights in North Korea to dip further into the problem.

But we only in March of last year passed a law on North Korean human rights, 11 years after the bill was motioned to help enhance living standards and human dignity of North Koreans. It was a relief that we have finally established legal and systematic grounds to help North Koreans.

Of 12 foundation boards, 10 must be recommended by political parties. But the main opposition that commands the largest seats has been delaying recommendation. Its stalling raises suspicion that it may be linking the problem to current political unrest and potential power transfer. But human rights is a universal value that must be free from political calculations. The party must remind itself that the law was passed on universal respect for human dignity, value and freedom.

The UN Human Rights Council meeting is in session in Geneva. The council will address the forced labor of young children. South Korean civilian groups will be participating in various events to promote international awareness on North Korean human rights conditions. North Korea is back in the international spotlight for its military provocations and high-profit murder. Yet we cannot even launch a foundation a year after the law has been in effect. What would the world think of South Korea? The legislative must speed up the procedure and do its duty according to the law by launching the foundation as soon as possible.


*The author is the chair of the North Korean Human Rights Advisory Committee.