Designer bows out, fashion gets political in Paris

Designer bows out, fashion gets political in Paris 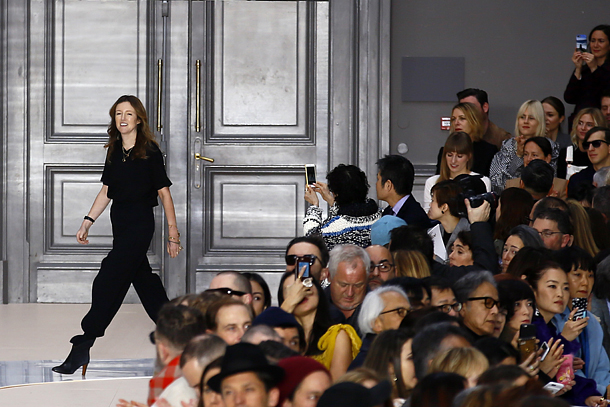 Fashion designer Clare Waight Keller comes out to bow at the end of the presentation of Chloe’s Fall-Winter 2017-2018 ready to wear fashion collection presented in Paris on Thursday. [AP/YONHAP]

But politics also was in the air with France’s culture minister saying the rise of nationalism could threaten Paris’ multicultural fashion industry.

The final chapter in Clare Waight Keller’s reign strayed not too far from the hippy-chic ‘70s DNA that’s now synonymous with the Chloe house.

It was a play-it-safe moment to cap six years at the helm of one of Paris’ most iconic fashion houses.

The ‘70s penchant for color was also clearly referenced in the 43-piece collection’s use of prints and lashings of icy pastel hues - shades of mint, peach and lilac that merged into earthy tones.

But, at times the garments and collection - though executed to perfection - seemed to lack a little soul.

Perhaps the house is ready for a change.

A fresh-looking Solange Knowles jetted in to the City of Light to catch Waight Keller’s final outing.

“I’m in Paris for one day only. I’m very excited to be here, as it’s her last show,” the American singer told The Associated Press in the bright, lofty salon inside Paris’ Grand Palais.

Knowles stunned in a diaphanous, sheer white Chloe gown with embroidered motifs and high neckline. No jet lag here. “I feel super ethereal and comfy and cozy,” she added, smiling.

Chloe is part of French identity

The presence of France’s culture minister at the Chloe show was a sign of how cherished the Parisian house, founded in 1952 by Mademoiselle Gaby Aghion, is to French national identity.

The house is actually credited with inventing the concept of ready-to-wear.

“Clare was the longest-serving designer there since Karl Lagerfeld, so this is an important moment,” said Minister Audrey Azoulay, who added that she was eager to learn the name of Chloe’s next designer.

Each model evoked a different creature prowling the runway in tribal-inspired silhouettes.

Snake, crocodile, zebra, tiger, antelope, wolf, bird, horse and sheep were all represented - totems conjured either literally in the material or in the imagery of the looks.

Some models were clad head-to-toe in leathers and crocodile or snakeskins, while others sported angry animal motifs that growled at guests.

These women were warriors or huntresses, wrapped proudly in the prey they vanquished.

Kendall Jenner wore a leather bodice that resembled armor with an asymmetric, feathered tribal skirt, her hair pulled back in severe braids with harsh black eye makeup. She reappeared in black crocodile.

Love it or hate it, one thing is certain - Rousteing’s designs are totally original.

Minister Audrey Azoulay told The Associated Press outside the Chloe show in Paris that a “populist power” like the far-right National Front party that wants France to leave the 28-nation EU would be “absolutely incompatible with the idea of fashion and freedom.”

Azoulay, who said she was fearful, added “a lot of our great fashion designers come from elsewhere.”

Each season, hundreds of fashion industry workers with EU passports travel to Paris without visas because of the EU freedom of movement rules.

Rick Owens explored the theme of the ritual for his ever-creative fall-winter collection Thursday, attended by singer Alicia Keys in a patterned headdress.

The American designer said he wanted to play with the very idea of a runway show that he considers a modern-day version of a ceremony.

This ironic juxtaposition of high and low was a typical Owens touch and triggered smiles from the crowd.