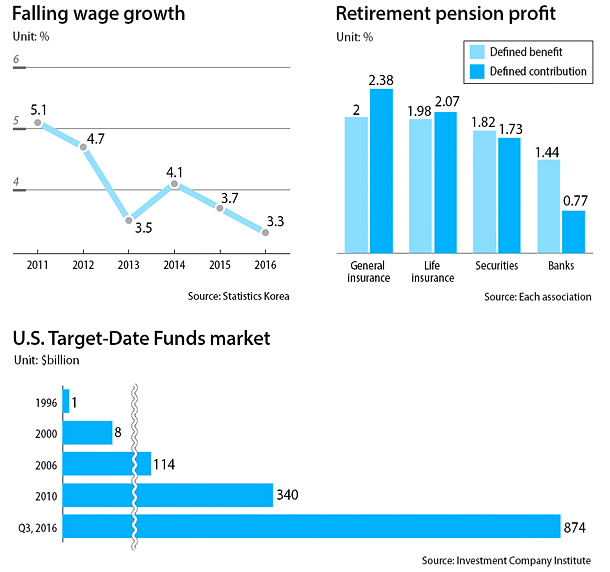 With the average life expectancy continuously rising, some younger Koreans are planning out their lives as long as 30 years after retirement. And with a slow growth in wages and profit from retirement pensions looking gloomier than ever, a financial product called Target-Date Fund (TDF) is rising as a popular investment option.

TDF is a type of fund that automatically resets a portfolio of stocks, bonds and cash in a time frame set by the investor. The strategy is to invest aggressively into stocks in the earlier stages of investment before reshuffling the portfolio to safer assets such as bonds and cash when retirement approaches to minimize volatility. For Koreans who can no longer be assured of living just on their savings and pensions after retirement, the idea of investment with long-term high profit margins are appealing.

According to the Statistics Korea, the average pay increase in Korea last year sunk to 3.3 percent, which has fallen since 2011 when it recorded 5.1 percent. Retirement pensions, whose investment profitability decides the size of future benefits, have been showing a profit of around 1.7 percent.

TDFs already are popular overseas. In the United States, the size of TDFs swelled nearly eight times in 10 years, up from $114 billion in 2006 to $874 billion by the end of third quarter last year, according to the U.S. Investment Company Institute. The Pension Protection Act of 2006, which helped employers better adopt automatic enrollment plans for retirement pensions, created a need of Qualified Default Investment Alternatives (QDIA) such as TDFs. The U.S. Department of Labor calls the QDIA “a product with a mix of investments that takes into account the individual’s age or retirement date” and “capable of meeting a worker’s long-term retirement savings needs.” Since President George W. Bush signed the act in 2006, the number of workers with TDFs surged from 42 percent to 77 percent.

Following the trend, asset management companies in Korea decided to partner with experienced U.S. counterparts to tap into the new market. Korea Investment Management, for instance, launched its own TDF on Feb. 27 with American asset management company T. Rowe Price. A potential investor can set their retirement year from 2020 to 2045 at five-year integrals. A 40-year-old investor who expects to retire in about 20 years, for example, can set his or her retirement year as 2035.

The fund is exposed to various types of assets including domestic stocks and bonds as well as those from overseas. “The product takes the propensity of Korean investors into consideration and distribute the asset into not just foreign stocks and bonds but also into the local ones,” explained Cho Hong-rae, the CEO of Korea Investment Management.

The first Korean firm to introduce TDFs was Samsung Asset Management, who began selling the fund last year. The three-month earnings rate of its TDF targeting 2045 as a retirement year is 4.87 percent as of Friday.

The competition among local asset management firms is likely to get fiercer. KB Asset Management will partner with Vanguard Group, one of the largest asset management companies in the U.S. and the leading TDF firm, will jump into the local market in June.

The ideal type of investors who should consider TDFs are those who lack investment knowledge or time to manage their portfolio on their own. This is because professional managers oversee the portfolio and the returns depend on how assets are managed, unlike defined contribution plans, in which investors themselves must make the contributions and manage the portfolios on their own to maximize their return, or defined benefit plans, in which specified pension payments are already set.

However, although intended for retirement, TDF are an investment option, and local traders warn of potential risks. “TDFs are still a new type of fund so we are not really sure how it will do in the local market,” said a trader at a major asset management firm in Korea who requested anonymity. “The reasons we see high earnings rates with Samsung Asset Management’s TDF is because of the rise in stock value of Samsung Electronics. I think it is a little bit too aggressive and risky to invest into TDFs as a source of retirement pension.”