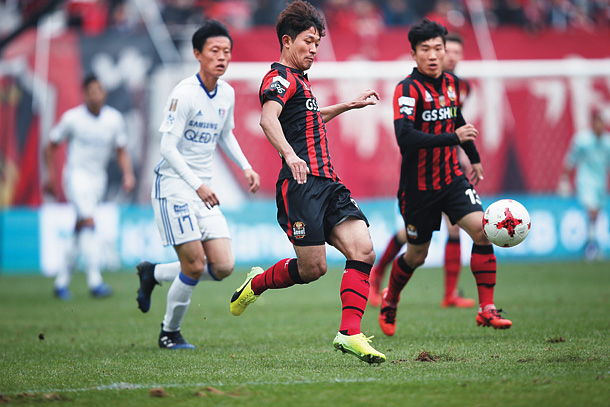 Lee Sang-ho makes a goal attempt during a game against the Suwon Samsung Bluewings on Sunday at the Seoul World Cup Stadium. Lee scored a goal to tie the game 1-1. [K-LEAGUE]

Once dressed in blue, Lee Sang-ho of Seoul FC, who played for the Suwon Samsung Bluewings for the past seven seasons, appeared in the Seoul World Cup Stadium on Sunday wearing red.

The match between Seoul FC and Suwon Samsung Bluewings was called a “super match,” as the two teams have a strong rivalry. In their 80th meeting, the game ended 1-1.

In December 2016, Lee transferred from Suwon to Seoul. When he signed a three-year contract with Seoul FC, Suwon Samsung Bluewings’ fans criticized him, but Seoul fans welcomed him with open arms. And indeed, during the game on Sunday, whenever Lee had the ball, Suwon fans expressed their dissatisfaction while Seoul fans cheered him on.

“I hope Lee tries his hardest as a player and succeeds at Seoul FC,” Seo Jung-won, coach of the Suwon Samsung Bluewings, said.

When Seo was a football player, he was also criticized by fans when he transferred to a different team. In 1997, Seo played for Anyang LG Cheetahs and left the K-League to play for RC Strasbourg Alsace in 1998. When he returned in 1999, instead of going back to his former team, Seo joined the Suwon Samsung Bluewings, and fans were very unhappy.

“I understand how players feel about transferring to a different team,” Seo said.

On Sunday, Hwang Sun-hong, coach of Seoul FC, had Lee as a starting right forward.

But in the 9th minute, Seoul allowed a goal by Kim Min-woo, Suwon’s midfielder. Lee made a goal attempt in the 41st minute, but was blocked by Suwon’s goalkeeper.

Down by one goal, Lee ended their lead in the 62nd minute and played a big role in concluding its first game as a tie.

“Suwon fans’ booing was overwhelming, but I tried to overcome that,” Lee said. “I was happy to score a goal against my former team but I had to control myself during the goal celebration.”

Gangwon FC, which made its appearance in the K league classic for the first time since 2013 this year, also won its season opener against Sangju Sangmu FC 2-1.

The K-League started its season with a record attendance of 134,468 people from both the K league challenge and classic games over the weekend. Of those games, the match between Seoul FC and Suwon Samsung Bluewings had the highest attendance with 34,376 fans.