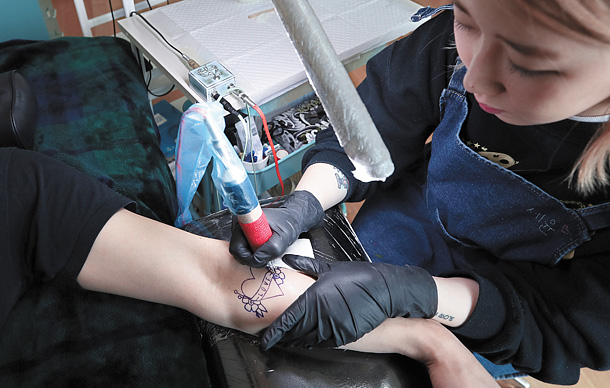 Kim Se-yun is one of the artists who tattoos unique designs using colorful pigments on her clients, most of whom are either female university students or office workers. [SCREEN CAPTURES FROM TATTOO ARTISTS DOY AND KIM SE-YUN]

The line between what is fashion and what is obscene can sometimes be unclear.

The social perception of tattoos has long been controversial in Korea. Those with tattoos have long been presumed to be involved in gangs and have been seen to be undutiful to their parents for not sincerely valuing the bodies they inherited. These ideas are still pervasive in modern Korean society, where more than a million people have tattoos.

When renowned rapper Dok2 recently appeared on an MBC entertainment program, he was required to cover his neck because the tattoos he had violated broadcasting regulations.

At a time where even the most ordinary people are starting to get tattoos, it remains a question to many whether tattoos should continue to be perceived as unethical and unhealthy. To find out, the JoongAng Ilbo, an affiliate of the Korea JoongAng Daily, met with a number of people with tattoos.

A 27-year-old university student surnamed Yun got a tattoo of a unicorn on her wrist last month. When she visited a tattoo shop, she initially did not intend to get one, but was just tagging along with a friend getting a tattoo. But she was mesmerized by the design and ended up handing over her wrist to the tattoo artist. “[Since getting the tattoo], I always wear long-sleeved shirts at home in case my parents find out and scold me,” she said and continued, “But permanently being able to have a design that I adore on my body strangely makes me excited.”

On the back of the neck of 34-year-old singer-songwriter Han Seok-hun sits a diamond-shaped tattoo the size of an index finger. Inside the diamond is a full moon above the ocean. On his left wrist, there is a coin-sized clef, while on his right wrist is a cross. “I hoped to have special symbols that represent me,” Han, who got his tattoos in March of last year, said. “I had only seen rough and wild tattoos on the news or in movies, but after seeing the watercolor tattoos that my close friend had, I also wanted to get one.”

The age of large-sized, animal-shaped tattoos drawn across gangster’s bodies has long gone. These days, cute and art-inspired tattoos that appeal to the emotions have seen a growth in popularity from those looking to place some art on their body.

Kim Se-yun is a tattoo artist who inks colorful and unique designs on whoever is looking for a special mark. The 28-year-old’s work space in Seogyo-dong, Mapo District, western Seoul, is covered in colorful tattoo designs glued on walls.

“After consulting with customers, I come up with styles, designs and colors to create a customized design that only he or she would have,” Kim said. “These days, quite a number of customers are looking for cute and girlish tattoos that suit the tastes of female university students.” According to Kim, the majority of her customers are young women or office workers instead of tough-looking men.

Thanks to the diversification of tattoo designs that appeal to a greater population of people, Korean-style tattoos have become very popular, even with foreigners. Some even jokingly say that it is as well-received as Hallyu, Korean Wave, by foreigners. Korean tattoo artist Doy, has even earned a title of “Tattoo Hallyu Star.” On his Instagram, he posts various designs like a swimming dolphin, a uniquely pattered flying bird and an owl drawn to look like a sketch.

“Korean tattoo artists have managed to come up with their own delicate tattoo style,” said Doy and continued, “[This] style can’t be found elsewhere.”

It has been three years since Korean-style tattoos began gaining attention. It started spreading outside of the country as tattoo artists used social media as their main promotional tool. Doy, for example, has more than 300,000 followers on his Instagram. Every time he posts his work, replies in various languages are written below. In fact, among hundreds of inquiries made everyday, half are from foreigners. It is not uncommon to see people flying all the way to Korea to get a tattoo from him.

Though Korean tattoo artists’ talents have been acknowledged and are liked internationally, they are in fact very careful about doing their jobs domestically because the procedure itself is illegal and they cannot simply ignore the general public’s negative views on tattoos.

“Tattooing is an industry with a lot of potential that could also develop into representing Korean culture but legal problems entail [as of now],” said Doy. “Even if the laws are revised, if people’s perception of tattoos does not change, there will still be limits [in developing the industry].”

More than a million people get tattoos annually, according to the Korea Tattoo Association, but tattoos are still implicitly regarded as taboo. A 30-year-old surnamed Kim, who worked at an investment bank in Korea and recently moved to another investment bank in Hong Kong said, “In Korea, I couldn’t go to work without wearing a watch.” This was due to the star-shaped tattoo she got on her left wrist while she was studying at a school in London as an exchange student. Some senior workers at the bank in Korea scolded Kim, saying “Are you a gangster?” However, Kim said she feels a lot more comfortable in her new job because “In Hong Kong, nobody says anything about the tattoo on my wrist. I never imagined that the tattoo I got to keep my memory of university life in London would become such a nuisance at work.”

A 27-year-old job seeker named Kim Cheol-hyeon also experienced similar trouble. Kim, who focused on studying piano in high school got a triangular tattoo on his right middle finger with friends upon graduation. Kim, who is working as an intern, now covers the tattoo with a bandage every day. “I believe my social life [at work] will become more inconvenient so I’m planning to just get it off with a laser.”

For those who hope to get a tattoo but are feeling reluctant at the same time, a tattoo skin printer has been developed. After drawing a tattoo design through an application, users rub the design on the part of the body they wish to get stamped. The design is drawn with raw cosmetic materials, and therefore, has vivid colors. The design is also easy to rub off. The machine was developed by Samsung Electronics’ startup Sketchom.

“We targeted those who are hesitant about getting tattoos due to their permanence and somewhat dangerous procedure,” said Sketchom’s representative Lee Jong-in. “I hope tattoos become a solid way for people to be able to proudly express themselves.” 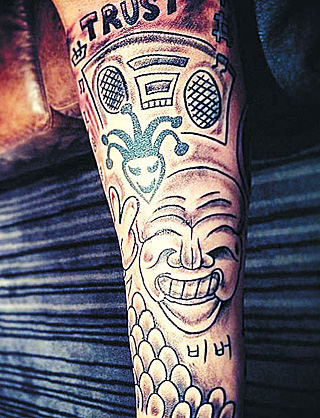 Justin Bieber’s tattoo, which was designed by a Korean tattoo artist, would have been illegal if it were done in Korea

Canadian pop singer Justin Bieber is known to his Koreans fans for many reasons. His most unique connection to Korea is his Hahoe mask tattoo which features his last name spelled out in Hangul below. Bieber’s tattoo is the work of a Korean tattoo artist Jo Seung-hyeon, who is based in Canada. If the singer had gotten the procedure in Korean, his Hahoe mask tattoo would have been illegal. According to Korea Tattoo Association, the only countries that ban non-medical professionals from drawing tattoos on adults are Korea and Japan. Though the government allegedly has been making efforts to create more jobs in various industries, including those involving tattoos, there has not been much advancement. Though allowing non-medical professionals to operate tattoo shops was proposed by the former National Assembly, it was naturally terminated with the end of the term.

There is no specific article that bans non-medical professionals from performing tattoo procedures, but Medical Law Article 27, which states that nobody other than medical personnel are allowed to provide medical services, basically functions to bar tattoo artists from putting tattoos on people. The controversy over the legality of giving tattoos exploded in 1992 when the Supreme Court took the side of a victim who filed a damage suit over the side effects of an eyebrow tattoo.

Though there have been strong voices from tattoo artists demanding that tattoos should be perceived as art, medical circles still disapprove of the idea, citing the danger of infection caused by the injection of dyes into skin tissues. “Although [tattoo artists] claim to use disposable needles, blood could be smeared into other parts of the body, possibly resulting in the transmission of hepatitis B and C,” said Korean Medical Association’s spokesperson Kim Ju-hyeon, who stressed that “tattoo procedures must be performed by medical practitioners.”