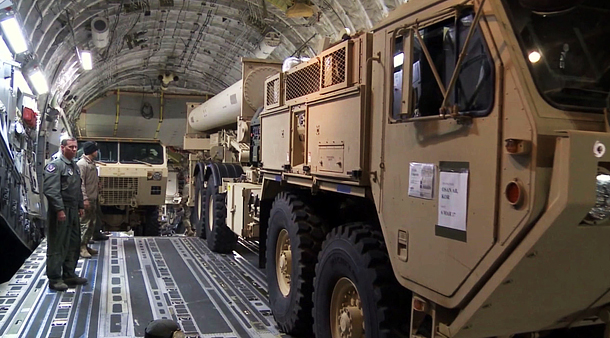 In this photo provided by U.S. Forces Korea, a truck carrying parts for U.S. missile launchers and other equipment needed for the Terminal High Altitude Area Defense (Thaad) antimissile system arrive at Osan Air Base in Pyeongtaek, Gyeonggi, Monday night. The U.S. military has begun moving equipment for the controversial missile defense system much earlier than expected. [YONHAP]

The deployment is months earlier than expected.

Seoul’s official stance was that the system would be deployed and operated by the end of this year, though local media speculated the process could start as early as June. 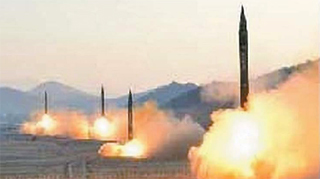 But after North Korea’s recent missile launches, Seoul and Washington sped up the deployment.

Two officials from the Ministry of National Defense said the equipment will be held at a confidential location and be transported to the Thaad battery’s ultimate home in Seongju County, North Gyeongsang, after South Korean and U.S. military forces finish renovating the area.

The military officially declared the early deployment during a regular briefing Tuesday morning. It said the rest of the Thaad battery will arrive “within the earliest time possible.” Two launchers were said to have come, but further details on any other equipment were withheld.

South Korea’s military also refused to specify when the remaining parts will come or when the antimissile system will go into operation. Thaad will not be part of the ongoing military drills between Seoul and Washington, which will run through late April, said the officials.

North Korea’s growing nuclear and missile provocations were said to have been the main reason Seoul and Washington decided to advance the deployment.

Officials refused to comment on why Monday was chosen for the arrival of the first components.

Asked whether the change of schedule had anything to do with North Korea’s launch of four ballistic missiles early Monday morning, they said it was “nonsense” to think the South and the United States could rush through negotiations on such short notice.

South Korea’s political calendar was also not an issue, they said, referring to the Constitutional Court’s upcoming ruling in the impeachment trial of President Park Geun-hye.

China, which along with Russia has vehemently opposed Thaad’s deployment, was not notified of Monday’s arrival in advance, they said.

China believes the Thaad battery is actually intended to spy on its airspace. Seoul and Washington maintain it is not.

China’s Foreign Affairs Ministry spokesman Geng Shuang said Tuesday in a regular briefing that Beijing “firmly opposed” South Korea’s Thaad deployment and that it would take “necessary measures” in order to safeguard its national interests, according to Yonhap. The spokesman reportedly said that Seoul and Washington would have to take responsibility for “all the problems” the decision will create.

Travel industry sources in China said last week they were instructed by the Chinese government not to sell any tour packages to South Korea, both group and individual, starting from next Wednesday.

At least 23 Lotte supermarkets across China were shut down for alleged violations of safety regulations, though South Korea considers it retaliation for Lotte Group’s swap of a golf course in Seongju for the Thaad site.

While announcing the Thaad deployment Tuesday, the U.S. Pacific Command said, “North Korea’s accelerating program of nuclear weapons tests and ballistic missile launches constitute a threat to international peace and security,” and that Thaad will contribute to a “layered missile defense system.”

The U.S. Pacific Command stressed that the antimissile system is a “strictly defensive capability” and “poses no threat to other countries in the region,” in an effort to appease Beijing and Moscow.

Thaad’s arrival was filmed by the Osan Air Base and made public in a short YouTube video titled “THAAD Deploys to Republic of Korea.” The clip, which runs for about three minutes and a half, features two eight-wheeled launch pads disembarking from the aircraft.

The surprise announcement from the South Korean and American militaries came a day after North Korea fired four missiles off its eastern coast Monday morning, three of which were suspected to have fallen into waters within Japan’s exclusive economic zone.

South Korea’s Joint Chiefs of Staff (JCS) said they were working with their U.S. counterparts on further analysis on what type of missiles they were, adding that chances were “low” any of them were intercontinental ballistic missiles, as Pyongyang threatened to fire.

Fired from the Tongchang-ri long-range missile launch site in North Pyongan Province at around 7:36 a.m., the four projectiles reached an altitude of about 260 kilometers (162 miles) and flew 1,000 kilometers below splashing into the East Sea, said the JCS.

Lee Cheol-woo of the ruling Liberty Korea Party, who heads the Intelligence Committee, revealed some of Lee’s statements to reporters after the meeting.

The NIS chief said it was a “new” phenomenon for North Korea to fire four missiles on the same day, according to Lee, and that it appeared to be a message for Washington.

In its first response since the missile launches, the North said Tuesday through its state-run Korean Central News Agency that leader Kim Jong-un supervised a ballistic rocket launch drill of the Korean People’s Army Strategic Force and that the military branch was “tasked to strike the bases of the U.S. imperialist aggressor forces in Japan.”

The article did not mention when or where the drill took place, but said, “The four ballistic rockets launched simultaneously are so accurate that they look like acrobatic flying corps in formation,” citing a quote from Kim Jong-un.

The leaders agreed to strengthen their combined defense posture and cooperate in sanctioning the North. Trump said he supports Seoul’s stance “100 percent” and that he would continue to do so in the future.