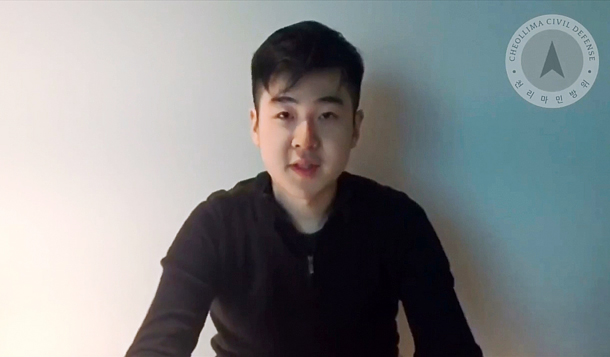 Kim Han-sol, the eldest son of Kim Jong-nam, delivers a message in a video clip posted online on Wednesday. [YONHAP]

Kim Han-sol, the eldest son of Kim Jong-nam, who was assassinated last month at the Kuala Lumpur International Airport, delivered a message in a video posted online. It appeared that he, his mother and sister were being sheltered or otherwise aided by China, the U.S. and the Netherlands.

“My name is Kim Han-sol. I am from North Korea,” says the young man in the video, who calls himself, “part of the Kim family,” referring to the dynasty that has ruled North Korea with an iron fist for three generations, starting from his grandfather Kim Il Sung, the state’s founder, in 1948.

The man in the video is highly likely to be Kim Han-sol, who gave a TV interview in 2012 to Elisabeth Rehn, a former lawmaker and minister of defense in Finland. In the 2012 interview, he called North Korean leader Kim Jong-un a “dictator.”

To prove his identity, the man shows a North Korean diplomatic passport, but when he opens it to show its identification page, the image is blacked out on camera.

“My father has been killed a few days ago I am currently with my mother and sister,” said Kim. “And we are very grateful to …” The rest of that sentence is cut off.

At the end of the 40-second video, Kim said, “We hope this will get better soon.”

Kim does not reveal his location nor the filming date. A group called Cheollima Civil Defense uploaded the video at around 7 a.m. Wednesday on YouTube. Cheollima in Korean means a horse that can travel up to 400 kilometers (248 miles) a day. A message below the clip reads in Korean: “To the people of North Korea.”

On its website, the group said it had “responded last month to an emergency request by survivors of the family of Kim Jong Nam for extraction and protection.” It noted that three members had been “relocated to safety” without elaborating further.

“This will be the first and last statement on this particular matter, and the present whereabouts of this family will not be addressed,” said the group.

It went on to credit the governments of China, the U.S. and the Netherlands for providing assistance to the Kim family without specifying what type of assistance except to say it was “emergency humanitarian assistance.” It also thanked a fourth government without identifying it, saying it is “to remain unnamed.”

In particular, the group expressed gratitude to Lody Embrechts, the Dutch ambassador to South Korea “for his timely and strong response to our sudden request for assistance.” The group lauded the ambassador as “a credit” to the Dutch and “their long and principled stance for human rights and humanitarian norms.” The group also lamented that some foreign governments had refused to help the Kims, saying they “refuse assistance” in an apolitical and humanitarian case without identifying them.

Kim’s video is the only clip the group has uploaded on the video sharing site.

The YouTube video breaks Kim Han-sol’s silence since his father’s assassination in the middle of an airport in Kuala Lumpur three weeks ago amid questions over his family’s safety and whereabouts.

It was thought the son might fly to Malaysia for a DNA identification process and to claim his father’s body days after the killing, but Kim hasn’t.

Kim Han-sol’s mother is Ri Hye-kyong, Kim Jong-nam’s second wife. The couple also have a daughter named Kim Sol-hui, who is younger than Kim Han-sol. The family lives in Macau.

Kim Jong-nam’s first wife and daughter reportedly live in Beijing. South Korea’s National Intelligence Service said last month in the wake of Kim’s assassination that both families were under the protection of the Chinese government.

Malaysian authorities have identified a banned chemical component, VX nerve agent, as the cause of Kim Jong-nam’s death. North Korea has refuted that finding and demands the return of his body.