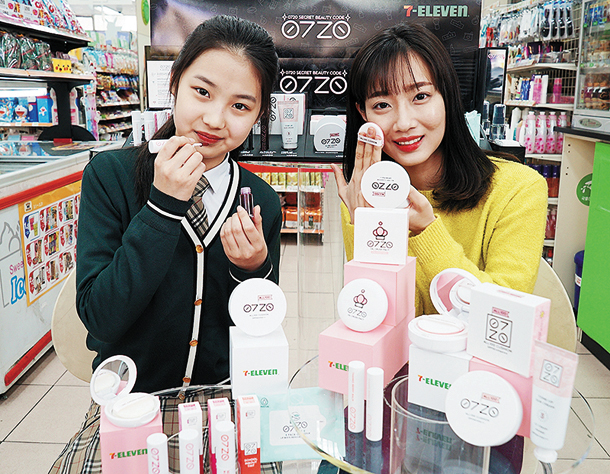 7-Eleven became the first convenience store to put cosmetics on its shelves.

The company announced plans Thursday to start selling cosmetics brand 0720 in 30 major branches this month. After a trial period, the products will be sold in every 7-Eleven branch next month.

Although convenience stores have sold beauty items like lip balm or face masks in the past, this is the first time serious cosmetics will be offered.

The brand was developed by a small domestic company called BCL, which focused on skin care products for middle-aged women before they released 0720 last month.

0720’s target consumer is teenagers and women in their early 20s who spend most of their day at school or work.

The company explained that it saw potential in convenience stores becoming a frequented sales channel for cosmetics, given that they are more accessible than brand stores, which are mostly located in developed areas where students or office workers may not be able to frequent.

The fact that younger students are increasingly putting on more makeup was another reason 7-Eleven decided to place teen-targeted cosmetics on its shelves, as they are an important demographic.

“The fact that 0720 was made with safe components for young, sensitive skin was one of the reasons we chose the brand as the first cosmetic sold at our branches,” said Cha Eun-jee, 7-Eleven’s merchandiser for cosmetics. “Not to mention it was also cheaper.”

The company’s new challenge can be interpreted as an effort to strengthen its non-food sector. Convenience stores were long considered a supplier for instant food and snacks, but this is changing: sales from non-food products have gone up since 2011’s 12.4 percent to make up 14.4 percent of all sales last year. Other non-food items that sold well were facial masks and phone accessories such as chargers.