A powerful gangster story takes the stage: Ryoo Seung-bum returns to the theater to take on a once-in-a-lifetime role

A powerful gangster story takes the stage: Ryoo Seung-bum returns to the theater to take on a once-in-a-lifetime role 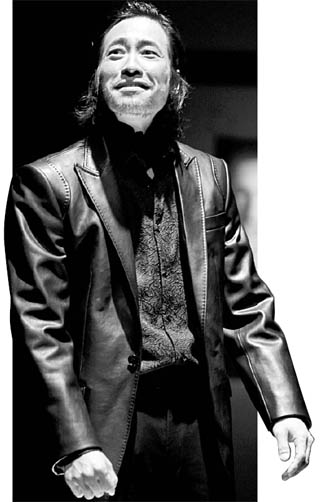 On a dark stage featuring the sounds of heavy bass guitar playing in the background, a movie poster of Al Pacino from the movie “The Godfather“ (1972) hangs on a wall. A spotlight catches Ryoo Seung-bum, the 36-year-old actor, as he appears on the stage. His bulging cheekbones and sharp-looking eyes make him look like a real gangster.

In a field crowded with stories in the romance or comedy genres, a play about a macho gangster who looks up to Al Pacino from “The Godfather” has attracted a predominately male audience - a rare phenomenon for theater, where 90 percent of the audience is female. Ryoo, who has focused on the silver screen recently, has made a comeback to the stage after 14 years in “Men’s Impulse,” which premiered 20 years ago, playing the role of a boss of a gangster group.

In an interview with the theatre magazine Scene Playbill, the play’s director, Cho Gwang-hwa, said that as the play is set in a world where men “dominate” the world, women were portrayed as the victims.

He worked his best not to insult the female audience, as misogyny has become a serious topic nowadays. He is hoping to portray the play as a social satire where men only ambitiously chase after power and fame. 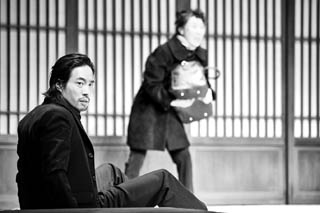 Ryoo Seung-bum, who plays the role of a gangster named Lee Jang-jeong in the play “Men’s Impulse,” makes a comeback to the theater after 14 years away. Ryoo’s portrayal of a gangster was natural. He was a macho man at times, but also a caring father. [PRO'S LAB]

The play’s main character Lee Jang-jeong, played by Ryoo, is the son of a mother who is the victim of domestic violence from her husband. Jang-jeong’s father, who is only into gambling and drinking, has even hit his own son. Due to the influence from his father, Jang-jeong tries to protect his family, not realizing that he is also turning forceful and controlling. This becomes the impetus for Jang-jeong to make up his mind to become a boss of a gang and a father to his group.

As the play is about the world of gangsters, it is full of violence and abusive language. Some obscene scenes from the original play were revised to eliminate some inappropriate expressions that may offend the audience.

At a press call held at CJ Azit on Jan. 19, Ryoo said “I have become interested in the field of theater. When I see actors perform in both movies and plays, I feel like having experience in both fields would improve my acting ability a lot. When I first saw the script, I started to imagine what the play would look like on the actual stage. This has made me want to take this role.”

Ryoo added that although he had been an actor for 18 years, it is still tough for him to deliver accurate feelings to the audience.

As Ryoo plays the role of a gangster from a rural area where they use a strong dialect, it was difficult for him to imitate the accent perfectly. He asked his colleagues for help and worked to improve his intonation.

The director said that the character of Jang-jeong should possess both warm and cold expressions in his face.

Sometimes, the character is very aggressive and acts violently, but at the same, he is very caring and protective of his family. Cho said that this is the reason why he has cast Ryoo for this role.

The play will run until March 26 at the TOM Theater located near Hyehwa station, central Seoul.