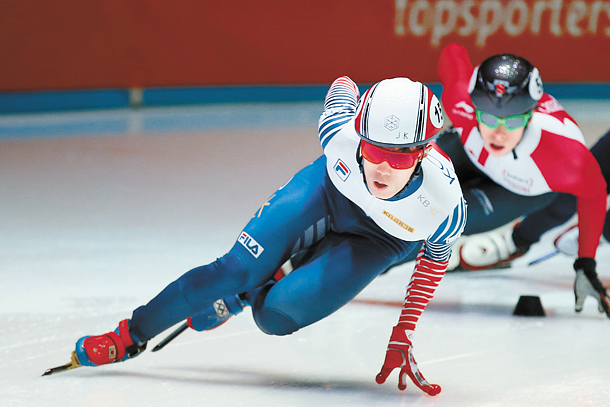 Sin Da-woon, front, competes in the 1,500-meter race at the Ahoy stadium in Rotterdam, the Netherlands.[AP/YONHAP]

Sin finished with a time of 2:16.919, .076 seconds ahead of Samuel Girard of Canada. His compatriot Seo Yi-ra finished third in 2:17.051. A number of Koreans won bronze medals during Day Two of the world championships but Sin was the only Korean to win a gold.

Although Sin finished fifth in the semifinal race due to Sholin Sandor Liu of Hungary’s penalty during the race, he was still able to advance to the final round by receiving an advantage.

Meanwhile, the women had disappointing finishes in the second day of the championships.

Skaters Choi Min-jeong, Shim Suk-hee and Kim Ji-yoo started strong in the 1,500-meter event as they all finished first in their heats in the semifinal round.

However, in the final round, Choi finished fifth in the 1,500-meters after falling at the beginning of the race. Shim managed to finish third while Kim was disqualified. Elise Christie of England won the event in 2:54.381, .012 seconds ahead of Marianne St-Gelais of Canada.

After being disqualified from the 1,500-meter final, Kim redeemed herself by finishing third in the 500-meter event in 43.744, while Choi and Shim failed to advance to the final round. Shim finished first in the Final B to finish the 500 meters race fifth, but Choi was disqualified in the semifinal round.

Despite Fan Kexin of China’s illegal contact against Shim at the Asian Games, she proved her strength in the short distance by winning the 500-meter race in 43.605, .025 seconds ahead of St-Gelais.

The relay event was one of Korea’s strength in both men’s and women’s events as it previously won a silver and a gold at the Asian Games but the country’s athletes failed to advance to the finals.

Not only will the Koreans have to compete among the world’s best to win the championship, they also will have to compete against their compatriots to receive an automatic spot at the 2018 PyeongChang Winter Olympics. The top Korean finisher who finishes within the top three in overall standing will be exempt from the national Olympic trials scheduled for April.

After the second day of the world championships, in men’s overall standings, Sin, who was the 2013 overall standing winner, sits in second place with 34 points, five points behind the leader, Sjinkie Knegt of Netherlands. Seo is in fourth place with 26 points.

The skaters will compete in the men’s and women’s 1,000 meters and 3,000 meters superfinal on the third day, racing among eight skaters with highest points after completion of other distances.