A love story told from very different points of view

A love story told from very different points of view 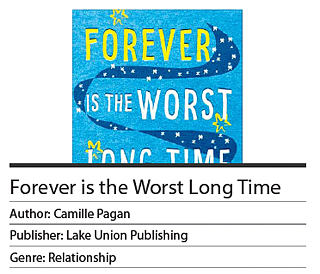 “Forever is the Worst Long Time” is a love story told from several very different points of view. Camille Pagan unpacks a complicated relationship among a struggling novelist named James; his best friend, Rob; and their shared adoration for Rob’s fiancee, Louisa (Lou). James keeps his feelings hidden for an entire decade, until one fateful night when Rob betrays Lou.

James can’t remember a time when Rob wasn’t a major part of his life. Their friendship was strong, until Lou came along. James fell in love immediately and was heartbroken when Rob announced his engagement to Lou. James knew Rob and Lou were wrong for each other, but he kept his emotions at bay. When Lou asked to meet with James years later and secrets of Rob’s infidelity were revealed, James did his best to comfort his best friend’s wife. Waking up next to her in bed the next morning was not a part of his plan.

When Lou confirms that she’s pregnant with James’ child, Rob cuts the couple out of his life. James is forced to learn how to live life without his best friend. On top of that, Lou chooses to wrestle with postpartum depression alone. She leaves her daughter Emerson to be raised by her father.

James pours all of the love he has into Emerson. He’s shocked when Lou returns to participate in her daughter’s life. But Lou has one condition: their relationship will be strictly platonic. James agrees to Lou’s terms, especially since he was just diagnosed with a life-threatening disease.

“Forever is the Worst Long Time” is a gut-wrenching look into a non-traditional relationship. When life pitches a curveball, sometimes you have to introduce unconventional methods into the family dynamic.

In the end, James and Lou choose to respond and make decisions based on love. Because you never know what you may lose in the future. AP