An even more painful expulsion from Blue House

An even more painful expulsion from Blue House 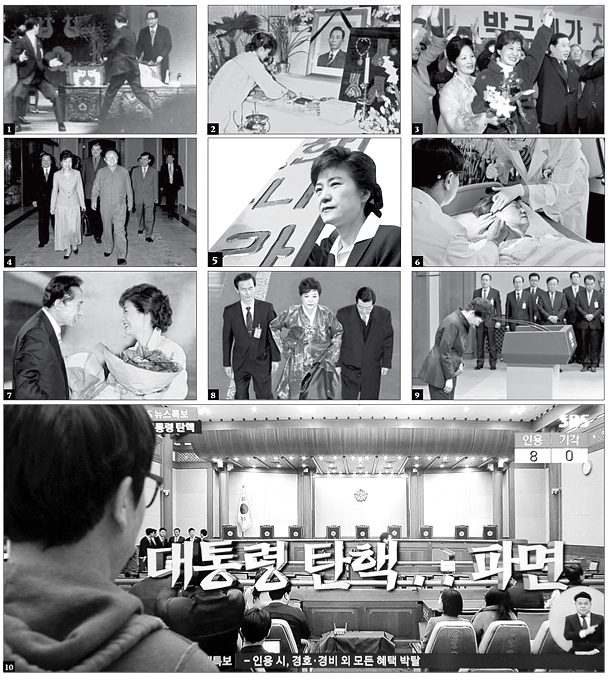 Park Geun-hye was 11 years old when she first entered the Blue House as the oldest child of former military strongman Park Chung Hee. He was elected president in 1963, two years after he seized power in the May 16, 1961 military coup, and officially moved into the presidential compound.

Fast forward to 2017 and Park will be remembered as the country’s first president forced out of the compound after being impeached, 11 months before the completion of her five-year single term. With the Constitutional Court’s unanimous decision to remove her from power, citing her lack of will to preserve and protect the Constitution and her betrayal of the public’s trust, Park’s 18-year political career ended in the kind of disgrace she could hardly have foreseen when she was elected the country’s first woman president in 2012.

Park first tasted the political life as Korea’s de facto first lady after her mother, Yuk Young-soo, was assassinated by a Japanese-born North Korean sympathizer during a televised Liberation Day ceremony on Aug. 15 in 1974.

For the next five years, Park accompanied her father on official trips and ceremonies and entertained foreign dignitaries, learning the nature of politics and power.

Five years after the killing of her mother, Park and her two siblings experienced an even worse family tragedy: the killing of their father by trusted confidante Kim Jae-gyu, chief of Korea’s intelligence agency.

After her father’s death on Oct. 26, 1979, Park and her younger sister and brother packed up their belongings and left the Blue House on Nov. 21. It had been their home for 16 years.

It was the next difficult 19 years that made Park a lonely person who had trouble finding people to trust.

The Chun Doo Hwan government, which came to power through a bloody crackdown on an uprising in Gwangju in May 1980, tried to distance itself from the Park Chung Hee era, barring any official ceremonies commemorating the death of the former president.

Many of those who had pledged their loyalty to her father turned on the Park children, an experience that taught Park the cruel nature of power.

“The people that I should thank are not those who offer me a drink of water [when I am thirsty], but it is those who have always stood by me steadfastly no matter what, with genuine caring for me,” wrote Park in a memoir published in 2007.

Little is known about Park’s life in the years after her abrupt 1979 departure from the Blue House and her political debut in 1998. She chaired the Yookyoung Foundation, an educational charity set up by her mother in 1972, and the executive board of Yeungnam University, but Park remained out of the public eye during those 18 years.

But it seems certain that Park relied on Choi Tae-min, a cult leader who served as her mentor, and his family during those years. Choi died in 1994, but Park’s relationship with his daughter Choi Soon-sil led to the multi-faceted abuse of power and influence-peddling scandal that destroyed her presidency.

Park often said it was the financial crisis that swept across Asia in 1997 that propelled her to enter politics. She said she couldn’t bear to watch her beloved country lose the economic prosperity that her father had engineered as president.

By winning a legislative by-election in the conservative stronghold of Daegu in 1998, the oldest daughter of the former dictator began a political career that led her to win the presidency 14 years later, allowing a return to the Blue House she had grown up in.

Park’s public appearances as a lawmaker elicited fanfare and even tears from Koreans who had deep nostalgia for her ill-fated parents, especially her father, who is still respected for his helping to pull the country out of the ashes of the Korean War, despite human rights violations and intolerance for calls for democracy.

Park’s meeting with North Korean leader Kim Jong-il in Pyongyang was a special moment: a rare meeting between the children of the two autocrats who had ruled North and South Korea, each using threats from the other side as a rationale to rule his country in a reign of terror with no toleration of dissidents.

Park’s political acumen shone through in 2004, when she took charge of the Grand National Party, the predecessor of the Liberty Korea Party, which faced the prospect of overwhelming defeat in the 2004 general election after a public backlash against its role in impeaching then-President Roh Moo-hyun. Park personally saved the sinking ship. She relocated the party’s headquarters to a set of makeshift tents on the banks of the Han River in a publicity stunt. The party won 121 seats in the 300-seat parliament, enough to block many of the Roh government’s initiatives.

Park’s concession of defeat in the hard-fought 2007 primary race to win her party’s presidential nomination to Lee Myung-bak enforced the public perception that she was a politician with principles. “I humbly accept the primary outcome. Let’s forget all the internal wrangling. I am deeply wishing to see Lee elected as our next president,” said Park in a speech.

Park’s political skills once again seemed impressive in the 2012 general election as she steered her struggling Saenuri Party to win a majority of 152 seats in a surprise victory. Using that surprise victory as a springboard, Park won the presidential election on Dec. 19, 2012, becoming the first candidate to win a majority vote of 51.6 percent since the 1987 Constitution restored a direct presidential election after decades of authoritarian ruling.

In her inauguration address, Park promised to the people, “I will build up a government that is transparent and competent and free of corruption so that I can win people’s trust in it.”

As later events proved, it was a promise she did little to fulfill.