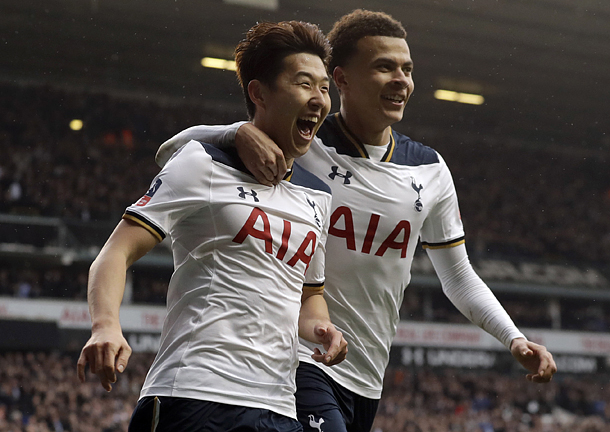 Son Heung-min of Tottenham Hotspur scored a hat trick during the English FA Cup quarterfinal match against Millwall FC to help his team win 6-0 on Sunday at the White Hart Lane Stadium in London.

In the 41st minute, he successfully made a left-foot shot from 20 yards. Following that, in the 54th minute, he managed to lead Kieran Trippier’s assist to another goal. To finish the game, Son scored his third goal, which was considered lucky, as the goalkeeper grabbed the ball but lost it.

While the Hotspurs were leading 4-0, Son assisted Vincent Janssen to score the team’s fifth goal. With Son’s record of three goals and one assist, the Hotspurs easily won against the Millwall and advanced to the semi-final.

Though Son recorded two hat tricks while playing for Bayer 04 Leverkusen of the German football club, his third professional hat trick marks his first with his current club since he joined in August 2015.

Son became the first Korean football player to record a hat trick in the Premier League, as it was never done by Park Ji-sung or Ki Sung-yong, who joined the league before Son.

When Son played for Leverkusen, he completed his first hat trick in Nov. 10, 2014, against his former team, Hamburger SV of the German football club. At the time, the team won 5-3. Following that, Son recorded his second career hat trick on Feb. 15, 2015, during its game against the Vfl Wolfsburg. Despite Son’s hat trick, Leverkusen still lost the game 5-4.

Looking at Son’s performance this season, so far, he scored six goals during the 2016-17 FA cup, seven in the Premiere League and one in the UEFA Champions League with the total of 14 goals. Aside from his personal success, Son was also given a perfect score of ten on whoscored.com, a football statistics website.