A ride to the top paved with glass at Lotte

A ride to the top paved with glass at Lotte 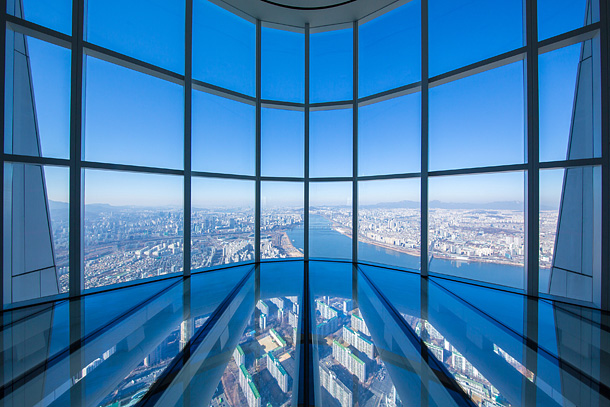 Seoulsky, the world’s third-highest observatory, is located at the top of Lotte World Tower in southern Seoul. The Sky Deck on the 118th floor includes a floor made of clear glass. [LOTTE WORLD]

The highest observatory in Korea opens on March 22 at Lotte World Tower in southern Seoul, and it will come with a whole host of thrills - including a virtual reality elevator ride and full glass deck.

Set 500 meters (1,640 feet) above the ground on the 123rd floor of Korea’s tallest skyscraper, Seoulsky will be the world’s third-highest observatory and allow visitors to see out as far as 40 kilometers (25 miles) on a clear day. The observatory’s operator said it aims to become a globally-known landmark.

While the highest accessible point is the 123rd floor, the observatory actually begins on the 117th and 118th floors, where visitors can get the thrill of standing on clear glass in the indoor Sky Deck. Acrophobics beware - the Guinness World Records has named this the highest glass floor in the world.

To make the experience more dramatic, the glass appears opaque at first. After everyone is gathered on the floor, an attendant then flips a switch to make the glass clear, giving the view from below a flourish of surprise.

No need to worry about the glass breaking: the entire area can hold just over 220 people with an average weight of 75 kilograms (165 pounds).

Two floors up, visitors can enjoy the breeze in the Sky Terrace, an open-air space surrounded by glass windows. On the 123rd floor, the highest point, is a cafe and lounge.

Serving as a prelude to this experience is the elevator ride, where each car’s walls have been covered with screens. As the elevator takes off from underground, the screens light up with video simulating a flight through Seoul. The ride to the top lasts one minute, and different videos play when visitors go up and come back down.

The fee to enter the observatory is 27,000 won for those over 13 and 24,000 won for children aged 3 to 12. Lotte plans to give special discounts to those visiting other nearby tourist sites like the Lotte World Aquarium and Lotte World amusement park.