Prosecutors to summon Park as a suspect

Prosecutors to summon Park as a suspect 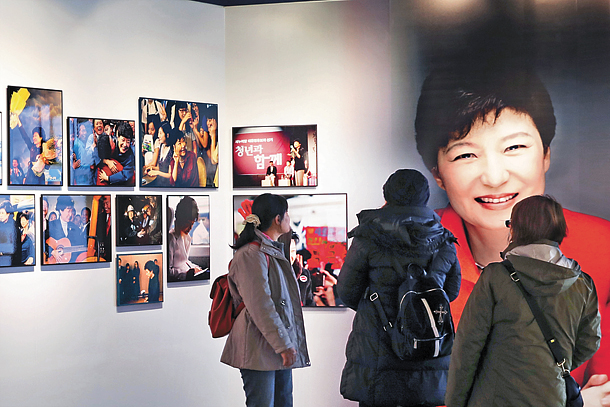 Tourists look at photos of former President Park Geun-hye on display in an exhibition hall of the Blue House on Tuesday, two days after the disgraced leader left the presidential compound. The prosecution will announce today when they will summon Park for questioning. A task force from the Presidential Archives visited the Blue House on Tuesday to discuss the designation of key materials and their relocation. [JOINT PRESS CORPS]

Prosecutors will announce Wednesday when they want to question former President Park Geun-hye as a suspect in abuse of power and corruption allegations.

A special investigation team headed by the Seoul Central District Prosecutors Office chief Lee Young-ryeol said Tuesday it will describe today its plans to go after Park. The team will decide today a date for her to be questioned and notify the ex-president.

No negotiations will take place with Park’s associates or attorneys on the terms for the questioning, a prosecution source said. “She will be summoned as a suspect,” he said.

Prosecutors are also considering a plan to compel her to attend a questioning session, such as obtaining a court warrant for an arrest, if she refuses to cooperate.

Independent counsel Park Young-soo handed over unfinished cases against Park to the prosecution last week. The special investigation team, which started the initial probe into the scandal involving Park, her inner circle and large business groups at the end of last year, was revived.

The Constitutional Court permanently removed Park from office on Friday, lifting the presidential immunity that has shielded her from criminal prosecution.

Although Park promised publicly that she would cooperate with the prosecution and the independent counsel investigations, she refused to be questioned. Nor did she allow a raid of the Blue House for evidence.

“We decide the questioning methods and other specifics,” said the source, referring to Park’s previous refusal. “We need consent from a witness for video recording, and we need to inform a suspect of video recording. But the specifics are decided by the prosecution.”

In November, prosecutors indicted presidential friend Choi Soon-sil and An Chong-bum, former presidential aide, on charges of coercing conglomerates to make massive contributions to two non-profit foundations controlled by Choi. The independent counsel probe concluded in February that Park was a bribery suspect in those cases. The independent counsel prosecuted Samsung executives, including its de facto leader Lee Jae-yong, for having bribed Park through Choi. After both probes, Park was not indicted due to presidential immunity. She denied all charges, claiming that the scandal was a conspiracy against her.

To counter the probe, Park started beefing up her team of defense attorneys, said Lawyer Sohn Beom-kyu, who represented her during the impeachment trial. Another lawyer of Park also told the JoongAng Ilbo that he will ask the prosecution to delay the questioning until her defense team is complete.

Prosecutors are also considering another plan to raid the Blue House. The prosecution and independent counsel each made attempts to raid the presidential compound to search and seize evidence of Park’s suspected crimes, but they were both blocked. The Blue House maintained the compound is a military installation guarding national secrets.

Despite a renewed plan for the raid, prosecutors are expected to face difficulty as the Presidential Archives began a process to preserve records produced by the Blue House during Park’s presidency. She served from Feb. 25, 2013 till March 10, 2017.

A task force from the archives visited the Blue House on Tuesday to discuss the designation of key materials and relocating them.

While the presidential records are generally open to the public, sensitive materials can be concealed in the archive for up to 15 years. Records concerning privacy - including Park’s whereabouts and actions during the crucial early hours of the Sewol ferry’s sinking on April 16, 2014, and circumstances concerning her medical treatments by unlicensed outside practitioners - can be kept under wraps for up to 30 years.

In order to view sealed records, an approval of two thirds of the incumbent National Assembly members or a warrant issued by a high court judge is required. In 2008, the prosecution obtained a warrant from the Seoul High Court to investigate a suspicion that former President Roh Moo-hyun took copies of the presidential records to his private residence without authorization. Sorting and cataloging the Blue House records for the archive normally begin six months before a presidency ends, but no preparation was done in Park’s case.

The Blue House will first create the catalogs and the Presidential Archives will review them. Acting President Hwang Kyo-ahn has the authority to make designations, the archives said.

As concerns grew about illegal leaks and destruction of sensitive materials, the archives sent a notice to the Blue House on Monday to pay special attention to managing the records.

Under the law governing presidential records, unauthorized destruction of materials can be punished with up to 10 years imprisonment. Concealment and leaks are punishable by up to seven years in jail.

Opposition parties said the prosecution should raid the Blue House as soon as possible because many of the records are evidence of Park’s alleged crimes. “Hwang must also not help her hide evidence by abusing his power to designate them as presidential records,” said Rep. Yun Kwan-seok, a spokesman of the Democratic Party.