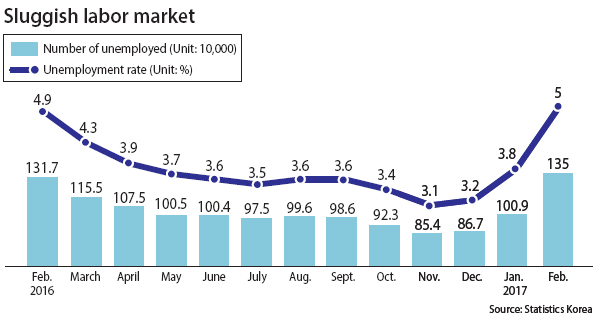 Korea’s unemployment rate rose to its highest level in seven years largely due to ongoing corporate restructuring. Many of the other indicators showed that labor market conditions are similar to where they were during the Asian financial crisis.

The unemployment rate in February rose 0.1 percentage points from a year ago to 5 percent. This was the first time the figure hit 5 percent since January 2010, the government said Wednesday. It was the highest mark in 16 years for February’s data.

“February tends to be the month when unemployment rates rise as this is when many Korean college students graduate and the application process for the civil service jobs begin,” said Kim Ie-han, a director at the Ministry of Strategy and Finance. “The manufacturing sector continues to be sluggish due to the ongoing corporate restructuring in the shipping and shipbuilding industry and the transportation sector was also weak last month.”

Kim said that the number of people applying for entry-level civil service jobs in February hit an all-time high of 228,000, beating 222,000 from last year. Graduates are not automatically counted as unemployed unless they fill out job applications.

The number of workers in the manufacturing sector dropped by 92,000, while employees in the service sector rose 322,000 as there were more people working in the health care and retail industries, Statistics Korea said.

The number of unemployed rose 33,000, or 2.5 percent year on year, to reach 1.35 million last month. This was also the highest since August 1999 when the figure amounted to 1.36 million as the country was hit by a financial crisis.

The rate of the economically active population, or Koreans with jobs or willing to join the workforce, rose 0.4 percentage points year on year to 62.2 percent.

“Some of the labor market conditions such as employment rate have improved but there are various uncertainties both at home and abroad, along with weakened consumer sentiment and domestic economy remain in the country,” said Kim at the Finance Ministry. “The government will come up with a 24 trillion won ($21 billion) worth financial package and execute the budget as early as possible to boost the labor market. We will also announce our plans that will focus on helping young Koreans find jobs by this month.”