Ulsan mayor discusses the draws and successes of his city

Ulsan mayor discusses the draws and successes of his city 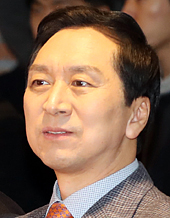 ULSAN - Over the course of the past half century, Ulsan has transformed itself from a small fishing village off the southeastern coast of the peninsula to the industrial capital of the nation. Now, it marks its 20th anniversary as one of Korea’s seven metropolitan cities, an effort which was propelled by the passion of its residents, according to Ulsan’s mayor.

Kim Gi-hyeon became mayor of the city in July 2014. He is a Busan native who received a law degree from Seoul National University and previously served as a lawmaker of the then Saenuri Party.

Last year, Ulsan Metropolitan City announced a set of 10 key projects and nine supplementary events to celebrate the 20th anniversary of obtaining metropolitan city status, including a range of cultural, governmental, economic and ecological programs. The city also aims to attract 4 million tourists as a part of its “Visit Ulsan” year, compared to 2.41 million visitors in 2015.

“In order for Ulsan to grow to a metropolitan city with a population of 1.2 million from 200,000 only in half a century, and to be the leading city of Korea in manufacturing, export and GDP, universities have played a critical role,” Kim said at the opening ceremony of the Times Higher Education’s Asia Universities Summit at the University of Ulsan.

Kim said that universities can help “decide a city’s fate and nation’s future,” adding that furthermore the “autonomous government has a greater role for universities’ growth.”


Q. What is the significance of Ulsan marking its 20th anniversary of attaining metropolitan city status, and what do you think is the city’s greatest achievement?

A. Over the past 20 years, Ulsan achieved rapid development in the economic, environmental and cultural sectors, and our production and exports grew up to fourfold. We restored the water quality of Taehwa River, which was polluted at grade 5 to grade 1 level, to become one of cleanest city rivers, and also increased the number of cultural facilities, including a public library and museums. During this period, the Ulsan National Institute of Science and Technology was founded, the KTX Ulsan station opened, and the R&D sector also expanded.

This year also marks the year of “Visit Ulsan.” What is Ulsan’s greatest lure and what tourist spot would you recommend to visitors?

Ulsan is a city where you can experience mountains, rivers and the East Sea all in one location. Just 30 minutes from the heart of the city is the ocean, another face of Ulsan. There is Jangsaengpo Whale Culture Village, an industrial complex that is evidence of the economic strength of the nation. But I especially recommend Taehwa River Seepri Bamboo Grove, Youngnam Alps and Daewangam Park.

What is your greatest achievement since becoming mayor?

I put my utmost efforts into creating jobs and revitalizing the local economy amid global economic recession and shift in industrial structure. This includes procuring 9.37 trillion won ($818.8 billion) in investments and creating 9,837 new jobs and procuring 2 trillion won in state budget annually.

You have ranked first for five consecutive years in Gallup Korea polls evaluating municipal mayors - what is the secret?

I think Ulsan’s citizens have been very generous, which I am thankful for. It seems my efforts were regarded well.