Twins’ Park Byung-ho may be returning to MLB this year

Twins’ Park Byung-ho may be returning to MLB this year 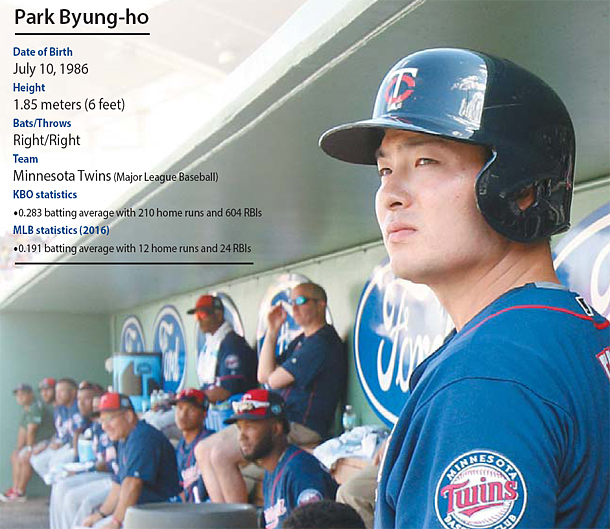 As Park Byung-ho of the Minnesota Twins shows improvements in his record from last year in exhibition games, he may return to the Major League. [JOONGANG ILBO]

Park Byung-ho of the Minnesota Twins has a high possibility of returning to the Major League after his performance in the spring camp exhibition games, where he is participating on invitation.

MLB.com, the official website of Major League Baseball (MLB), appraised the results of the Minnesota spring camp, saying, “Kennys Vargas [Twins] was listed as the favorite at DH [Designated Hitter] heading into spring training, but Park [Byung-ho] has been Minnesota’s best hitter this spring.”

However, Park was designated for assignment from the Twins and was transferred to the minor league.

Park continues to swing, putting aside any expectations of rejoining the majors. His spring training stats as of Wednesday include a batting average of 0.400 with three home runs, six hits, four walks and six runs. The MLB said Park is adjusting well to fastballs and though he suffered from six strikeouts, Park had four walks.

There were high hopes after Park slammed six home runs last April. While he was able to slug 140 meter (459 foot) long-distance home runs, he was demoted to the minor league because of his weakness to high fastballs (fastballs with a high course). Park’s record at the majors was a batting average of 0.191, 12 home runs, 21 walks and 80 strikeouts.

Returning to Korea, Park was intent on modifying his batting form.

He left Korea on Feb. 4 to attend the camp and said, “It isn’t a striking transformation, however, my batting stance was streamlined. Getting a chance to be at the batter’s box is the result.”

It wasn’t meant to be, for as soon as he arrived in the United States, he heard talk of being designated for assignment.

In high spirits, Park said, “This year was the start of the new season anyway. I’ll show how much I’ve changed from last year’s experiences.” His hard hitting at the exhibition game opened up the possibility of a return to the majors.

“More than anything, Park Byung-ho’s batting eye is sharp,” said Song Jae-woo, MBC Sports Plus analyst. “He also has a knack for pitch arounds [pitches outside of the strike zone],” adding, “When he regains his confidence, Park Byung-ho’s power will be more than sufficient for the Major League. Everything has become favorable for Park.”

Kennys Vargas, Park’s competitor on the Twins, has a batting average of 0.077 (13 at bats one hit), one run batted in (RBI) according to this year’s spring training stats.

Because Vargas is a member of the Puerto Rican national team at the World Baseball Classic (WBC), he is unable to participate in the exhibition games.

MLB.com is anticipating Park to push Vargas down to the minors and appear at the opening game of the regular season next month.

Fellow invitation player, Hwang Jae-gyun, San Francisco Giants, recorded two hits at four at bats at the exhibition game held at Arizona between the Cleveland Indians. The result of Hwang’s exhibition game was a batting average of 0.346 (26 at bats and nine hits) and three home runs.