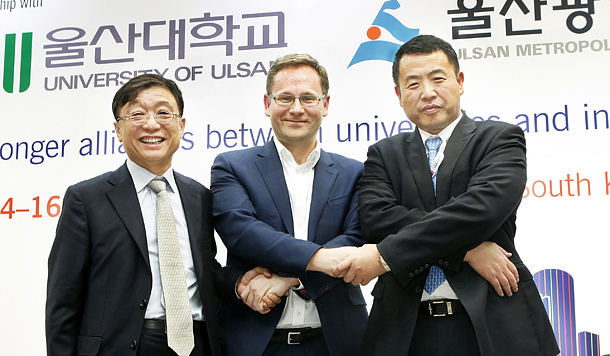 From left, University of Ulsan President Oh Yeon-cheon, Phil Baty, editor of THE World University Rankings, and Chun Lu, associate vice president of SUSTech, commemorate Shenzhen being named as the host city of the 3rd THE Asia Universities Summit at the closing ceremony of the 2017 summit. [PARK SANG-MOON]

ULSAN - The University of Ulsan handed the baton to South University of Science and Technology of China (SUSTech) in Shenzhen, Guangdong Province, as the host of the next Times Higher Education Asia Universities Summit as this year’s conference wrapped up its three-day run Thursday.

“Our role and mission for improving higher education should be lasting,” said University of Ulsan President Oh Yeon-cheon during the closely ceremony of the summit, in its second run this year.

Some 220 delegates from 86 universities across 24 countries took part in the Asia Universities Summit 2017, co-hosted by Ulsan Metropolitan City, discussing the theme of “Forging the future - building stronger alliances between university and industry.”

Chun Lu, associate vice president for international affairs of SUSTech, said after the school was announced as the third host of the summit next year, “Some 35 years ago, we were also just a fishing village.”

Shenzhen has since then become known as China’s Silicon Valley, he said, drawing comparison to Ulsan, which became a bustling industrial capital in the course of several decades. University of Ulsan, founded on March 16, 1970, marked its 47th anniversary Thursday, while SUSTech is even newer, established in 2012.

Chun said that the city, which has a population of 20 million people, has the largest GDP per capita in the country, and added, “while the economic growth in the rest of China has slowed down, we have maintained a 9 percent growth in GDP.”

Kim Doh-yeon, president of Postech, shared the history of steelmaker Posco, recalling the groundbreaking ceremony in April 1970, and said during his keynote address, “Pohang is a city of iron and steel. My dream is to add one more element, the pharmaceutical sector, for our city.”

Postech also was placed first in THE’s ranking of universities publishing the highest proportion of their research output in collaboration with industry.

Despite an economic downturn, Kim pointed to efforts to encourage students to make start-ups and entrepreneurs through collaboration with the cities of Pohang and Ulsan, as well as its Postech-Industry Integrated Research Center, which invites researchers from industries as tenure-track professors to share their field expertise.

An example, he said, was an integrated research center with LG Display and Postech launched last April, appointing two professors and six research professors from LG Display to work with a team of Postech academics.

He continued, “I have a dream during my term as president to recruit 150 new professors - 100 traditional professors and 50 through the Postech industry integrated research center.”

Jim Newton, market development director at McLaren Applied Technologies, an offshoot of the British Formula 1 racing business, addressed an overarching question throughout the conference on the onset of the fourth industrial revolution and whether artificial intelligence may take over jobs in the future.

“Around 120 years ago, in the first industrial revolution, we changed education to empower farmers to get jobs,” said Newton. “For the engineers of tomorrow, we want to enable new levels of creativity and appreciation of other disciplines to interconnect with engineering.”

“We within McLaren, based on our racing mindset, are a very pragmatic group of people,” he said on AI taking over jobs, which he said “will create space for human beings to do what they are best at, which is being creative, making judgements, where there is no clear-cut decision available. I suspect that the future jobs market will develop in that way.”