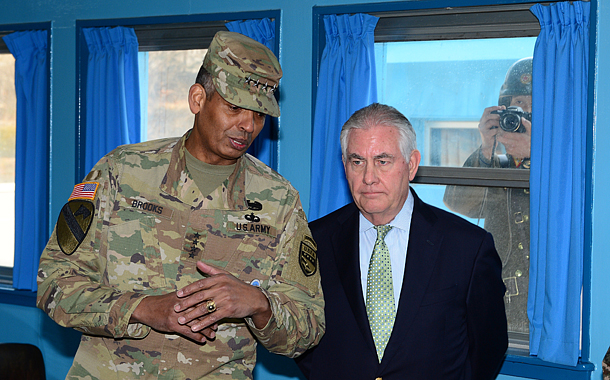 U.S. Secretary of State Rex Tillerson, right, talks with USFK Commander Gen. Vincent K. Brooks in the truce village of Panmunjom on Friday while a North Korean soldier outside the building takes photos of them through a window. Tillerson began his two-day trip to South Korea on Friday, flying from Japan. [YONHAP]

U.S. Secretary of State Rex Tillerson said Friday that China’s economic retaliation against South Korea for its decision to deploy the Terminal High Altitude Area Defense (Thaad) U.S. antimissile system was “inappropriate and troubling,” and that Washington asks Beijing to “refrain from such action.”

The statement was Tillerson’s first time personally addressing the issue in public. It was made during a 20-minute joint press conference with South Korean Foreign Affairs Minister Yun Byung-se in central Seoul, ahead of his closed-door meeting with Yun.

Tillerson touched down at Osan Air Base in Pyeongtaek, Gyeonggi, 70 miles south of the capital, Friday morning for his second of three-leg trip in Asia. He had flown in from Tokyo, where he had talks with Japanese Prime Minister Shinzo Abe and Foreign Minister Fumio Kishida, among others.

China fears that Thaad’s radar could be used to spy on its airspace, though Seoul and Washington maintain it will not. Beijing has been imposing wide-ranging retaliations against South Korea for its decision to deploy the antimissile shield, including the banning of Korean idol groups in China, blacklisting Korean actors and actresses in Chinese films and dramas, and most recently, blocking Chinese travel agencies from sending their clients to Korea.

Lotte supermarkets have also fallen victim, with at least 55 stores out of 99 in China temporarily closed over violations of safety regulations. The retail giant provided a golf course in Seongju County, North Gyeongsang, for the Thaad site.

On North Korea, Tillerson said, “The policy of strategic patience has ended,” and that the Donald Trump administration was “exploring a new range of diplomatic, security and economic measures. All options are on the table.”

Military action was included, he conceded.

“If North Korea takes actions that threaten the South Korean forces or our own forces,” he said, “then that will be met with appropriate response.”

“We have many, many steps we can take before we get to that point.”

Tillerson also hinted at more sanctions against the Pyongyang regime.

“I don’t believe we have ever fully achieved the maximum of action that can be taken under the UN Security Council resolutions with full participation of all countries,” he said.

On possible dialogue with North Korean leader Kim Jong-un, Tillerson said Washington would not talk unless the North denuclearizes and abandons its weapons of mass destruction.

Immediately after landing in Pyeongtaek, Tillerson was whisked to the Demilitarized Zone on the inter-Korean border, where he received a briefing at the truce village of Panmunjom and met with American troops at Camp Bonifas.

In the afternoon before the press conference, he paid a courtesy call to Prime Minister Hwang Kyo-ahn, who is also acting president, and stressed that the bilateral alliance was “ironclad.” He was planned to have dinner with Marc Knapper, charge d’affaires at the U.S. Embassy in Seoul.

Tillerson will fly to Beijing this morning, where he will meet Chinese President Xi Jinping.

Tillerson’s visit to Northeast Asia comes amid heightened tension here and in the U.S. after North Korean leader Kim Jong-un threatened in a New Year’s speech on Jan. 1 that the regime was in its “final stage” of test-firing an intercontinental ballistic missile (ICBM), the first of its kind. Trump tweeted days later: “It’s not going to happen!”

North Korea pushed through its first ballistic missile test of this year on Feb. 12 with an intermediate range projectile that peaked at an altitude of 550 kilometers (342 miles) and flew 500 kilometers before splashing into the East Sea. Just 22 days later on March 6, it test-fired four Scud-ER missiles off its eastern coast, three of which fell into waters within Japan’s exclusive economic zone; they all reached an altitude of about 260 kilometers and flew 1,000 kilometers.

A U.S. think tank, 38 North, recently raised the possibility of a sixth nuclear experiment by the North, citing satellite imagery near the Punggye-ri nuclear test site. An analysis showed that the site is “potentially suitable for the conduct of larger tests than those to date, up to a maximum of 282 kilotons,” it wrote.

If true, one possible date could be April 16, the anniversary of the birth of state founder Kim Il Sung, Kim Jong-un’s grandfather. North Korea has a history of celebrating significant anniversaries by flaunting its military prowess.

During a press conference that followed Tillerson’s meeting with Japanese Foreign Affairs Minister Kishida in Tokyo Thursday, the U.S. top diplomat said two decades of diplomatic and other efforts “failed” to denuclearize North Korea and that a new approach was needed.

“So we have 20 years of failed approach,” said Tillerson, according to the AP. “That includes a period where the United States has provided $1.35 billion in assistance to North Korea as an encouragement to take a different pathway.”

He added that part of his purpose of visit to the region was to “exchange views on a new approach,” but did not mention what that would be.