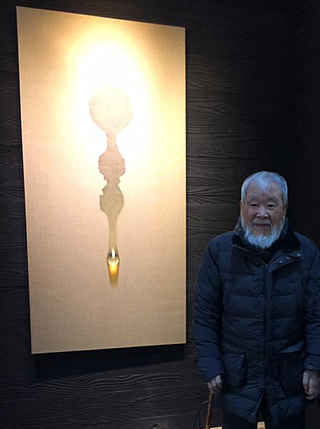 The renowned Korean artist Kim Tschang-yeul poses in front of his 2014 oil painting “Recurrence” during the opening of the exhibition “Water Remembers Everything” at the Kim Tschang-yeul Museum in Jeju island on March 8. [MOON SO-YOUNG]

JEJU - Water remembers everything and leads people to meditate, but at the same time it helps people wash off pain, fury and fear: this could be what the artworks now on view at a new exhibition at the Kim Tschang-yeul Museum on Jeju island tell together.

The show, titled “Water Remembers Everything” after a poem by Korean poet Kim Hyesoon, features 10 artists’ works which see and deal with water from different perspectives and in different mediums from one another. The participants include Kim Tschang-yeul, a renowned 88-year-old Korean artist nicknamed the “water drop painter,” whom the museum celebrates.

Since Kim showed his first water drop paintings at the “Salon de Mai” show in Paris in 1972, for which he received favorable reviews, he has continued to paint water drops for more than four decades.

His paintings create illusions of real water drops forming as brightly-shining beads on the canvases in the trompe-l’œil tradition and are open to various interpretations. Viewers are not only entertained by the illusions but also find them to be meditative.

Asked about the meaning of water drops at the opening of the exhibition on March 8, Kim said, “Its meaning is meaninglessness.”

This answer, which sounds like a zen riddle, can be partly solved by a note written by the artist for a 1988 solo show in Tokyo. In the note, he writes, “My act of painting water drops is the act of having everything dissolve in water drops and return to transparent ‘nothingness.’ When everything - including anger, anxiety and fear - is returned to ‘emptiness,’ we will experience real peace.” 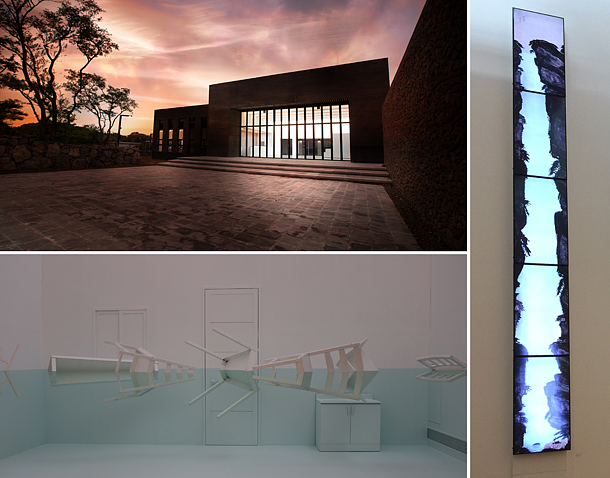 Top: The exterior of the Kim Tschang-yeul Museum. Above: The installation art “Green House”(2017) by Kyung Woo Han, and the video art piece “Parkyeon Falls”(2011) by Lee Lee Nam, right, are part of the “Water Remembers Everything” exhibition, which runs through June 11. [KIM TSCHANG-YEUL MUSEUM, MOON SO-YOUNG]

In this context, art critics and the artist himself have compared repeatedly painting water drops to a Buddhist monk’s training in repeated simple works.

“The works on view including Kim’s and those of other artists like world-famous Bill Viola and the young Jeju-based artist Boo Ji-hyun will help viewers meditate on water which has been related with humans from the beginning,” explained Kim Sunhee, director of the museum.

The museum was set up last September by the Jeju provincial government at the Jeoji Art Village in western Jeju. Although the island is not where Kim was born, (he was born in Maengsan, a mountainous town now in North Korea) he lived here during the 1950-53 Korean war.

He settled in France in 1970, where he married a French woman and spent more than 40 years.

“I love Jeju island - its water and its sunlight,” Kim said.