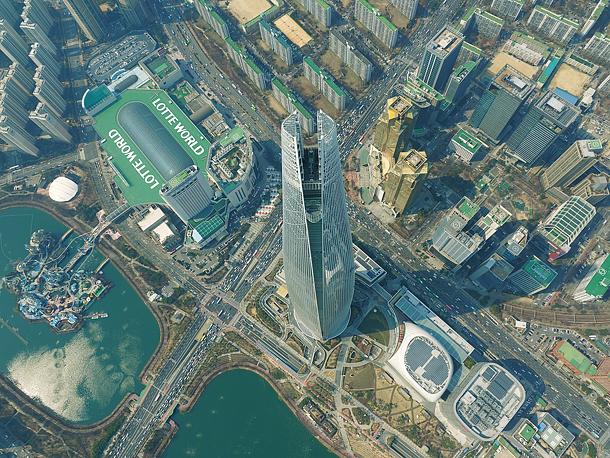 A photo taken with a drone shows a bird’s-eye view of the Lotte World Tower in Jamsil area, southeastern Seoul, which opens to the public on April 3. [LOTTE CORPORATION]

Lotte World Tower, a 123-story skyscraper erected in Jamsil area, southern Seoul, is the culmination of Lotte Group’s past growth and future ambition. The nation’s tallest building and world’s fifth unveiled its major facilities to the media on Tuesday, seven years after it first broke ground in 2010.

“It will become an epicenter of shopping, leisure and culture. It is expected to elevate Seoul’s competitiveness as a global city.” he added.

“The opening of Lotte World Tower is expected to generate 10 trillion won ($8.9 billion) annually [when combined with adjacent Lotte World Mall],” the company said, adding that it would create more than 21,000 jobs. It expects at least 5 million foreign tourists per year until 2021.

The horizontal structure at the base of the building, also known as a podium, consists of residential facilities, including a hospital, bank and gym, ranging from the first to the 12th floor. The second part of the building ranges from the 14th to the 38th floor and will be used as office space, including a majority of Lotte affiliates.

Lotte Corporation office had already moved in on the 19th floor.

The company’s new office is seen as an attempt to break away from the rigid and hierarchical corporate culture that is commonly found in many family-run conglomerates in Korea. Lotte implemented a free-seating system, in which there are no designated seats for employees, to promote a more flexible ambience in the workplace.

Only executives will get glass-walled separate office spaces. Common areas, for meetings and breaks, will be located on both sides of the office areas and will resemble greenhouses with numerous plants and uniquely designed chairs and tables.

The residential floors range from the 42nd to the 71th floor and will cost an average of 70 million won per 3.3 square meters (35 square feet).

The leisure part of the skyscraper starts at the 76th floor, where the six-star hotel Signiel Seoul is located.

Signiel is Lotte’s luxury hotel brand, the first domestic hotel brand to receive a six-star rating. The price for its basic room starts at 650,000 won per night. There are 235 rooms available and its most premium suites are located on the 99th and 100th floors and cost 24 million won per night.

Morten Andersen, general manager of Signiel, showed confidence in the hotel’s top-notch service, which includes Stay, a restaurant located on the 81st floor run by three-Michelin-star chef Yannick Alleno. Alleno will be in charge of wedding catering and room service.

The 108th to 114th floors will be dedicated to private office spaces, which will be only rented out as whole-floor units. Shin Kyuk-ho, the 95-year-old group founder, is reported to take up one of the floors. Seoulsky, the world’s third highest observatory, will be located on floors 117 to 123.

The pre-opening of Lotte World Tower comes at an odd time, when only a day before, the group founder and his three children stood before the court to defend themselves from business malpractice allegations.

The construction of Lotte World Tower has been a long-desired project of Lotte Group founder Shin, and the group chairman, Shin Dong-bin, who both have sought to make a one-of-a-kind landmark in Korea as well as a major tourism attraction.

The land site, located right across from the Jamsil branch of Lotte Department Store, has been reserved for the project since 1987. It broke ground in 2010 and completed its exterior construction in 2016 with a total investment of 4.2 trillion won.

The official opening on April 3 will proceed as scheduled, celebrating the 50th anniversary of Lotte Confectionery, the origin company of Lotte Group. Lotte will hold a firework event on April 2 at 9 p.m., for 11 minutes where more than 30,000 fireworks will decorate the Seoul sky.