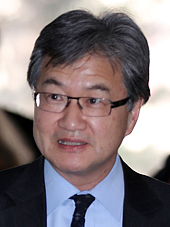 Washington’s special representative for North Korea policy, Joseph Yun, arrived in Seoul Monday night and kicked off his three-day schedule by separately meeting with some of South Korea’s leading presidential contenders, a strong sign the Donald Trump administration was wasting no time in articulating its official stance against the Pyongyang regime.

Yun, a career diplomat who was born and raised in Seoul until the age of 10, met South Chungcheong Governor An Hee-jung Tuesday morning for about an hour in a closed-door meeting and had lunch with Rep. Yoo Seong-min of the minor conservative Bareun Party, a breakaway from former President Park Geun-hye’s Liberty Korea Party.

Moon, former leader of the main opposition Democratic Party, who is currently leading in election polls with approval ratings above 30 percent, said he wasn’t planning to personally meet Yun based on his thought that it “wasn’t right on diplomatic protocol standards” for him to have discussions with the U.S. envoy before winning the primary, according to Lim Jong-seok, Moon’s senior secretary.

Lim said Moon was contacted by the U.S. Embassy in Seoul for a possible meeting.

Ahn Cheol-soo, former co-chair of the People’s Party, has no known plans of meeting Yun, which came as a surprise for local analysts because Ahn is another strong candidate in election polls, ranking third in the latest JoongAng Ilbo survey conducted over the past weekend. Moon ranked first with 34.7 percent, followed by South Chungcheong Governor An with 21 percent and Ahn with 13 percent.

Rep. Yoo Seong-min, who met Yun Tuesday, did not make it into the top 5 in the JoongAng Ilbo poll but ranked the highest for a candidate from the Bareun Party. Ahn’s close aides said they didn’t receive any calls from the U.S. Embassy about a meeting with Yun.

Kim Heung-kyu, a political science and diplomacy professor at Ajou University, who serves as Governor An’s diplomacy adviser, said the candidate explained to the American envoy his views on foreign affairs and national security, and heard what stances the Trump administration was reviewing to take against North Korea.

Kim, who said he accompanied An in the meeting Tuesday morning, furthered it was a “good opportunity to form a consensus” on related issues.

Today, Yun is also planned to meet with his South Korean counterpart Kim Hong-kyun as well as other government officials to discuss North Korean provocations. A spokesman from the Foreign Affairs Ministry said the South Korean government was not involved in planning out Yun’s schedule.

Yun, who arrived from Beijing after spending three days there, will be leaving Seoul Thursday.

The U.S. State Department said in a statement last Friday that Yun will meet his Chinese and South Korean counterparts to “continue our close coordination on North Korea policy.”

While Yun’s schedule in Beijing only mentioned a meeting with Wu Dawei, China’s special representative for Korean Peninsula affairs, the State Department said the American envoy was planned to meet with Kim Hong-kyun, South Korea’s special representative, and also “senior ROK [Republic of Korea] officials and members of civil society to discuss a range of regional and bilateral issues.”

Hua Chunying, spokeswoman of China’s Foreign Ministry, said Monday during a regular press briefing that Yun and his Chinese counterpart had “candid and in-depth exchange of views on easing tension on the Korean Peninsula, maintaining peace and stability on the peninsula and moving forward the denuclearization of the peninsula,” according to transcripts provided online by the ministry.

No further detail was mentioned.

Yun concurrently serves as deputy assistant secretary for Korea and Japan in the State Department’s Bureau of East Asian and Pacific Affairs. From 2013 to 2016, he served as U.S. ambassador to Malaysia.