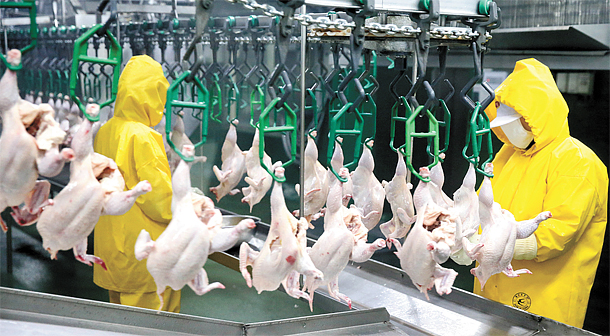 Workers at a Harim Corporation factory in Iksan, North Jeolla, are pulling out the remaining intestines and feathers from chickens as they hang upside down on a conveyor system on Friday. [KIM JUN-HEE]

Thousands of chickens, de-feathered and hanging upside down, were passing on a conveyor system around workers at a factory of the Harim Corporation in Iksan, North Jeolla, on Friday.

The workers’ hands moved with speed, pulling out the remaining feathers and intestines. But there was a rather dejected mood apparent on their faces.

“We withstand this work and the smell of blood and animals because we are proud that we can provide safe food for consumers,” said Soh Jeong-ok, the 51-year-old director of a production team at the factory. “Yet now people are pointing fingers at us saying that we are trying to profit from a price hike due to the spread of avian influenza.”

BBQ, a fried chicken franchise, tried to raise the price of whole fried chicken from 16,000 won ($14.30) to 18,000 won but backed out of its plan when the government notified the franchise it will investigate the company via the National Tax Service in the case of a price hike.

The H5N6 virus strain, which spread throughout Korea from last October, led to the live burial of more than 36 million birds, with chickens accounting for some 83 percent, according to the Ministry of Agriculture, Food and Rural Affairs on Monday. Live burials are preferred since culling is more expensive.

Harim Corporation produces about a third of the chicken market here, or some 500,000 chickens a day. Two factories are in charge of this, one in Jeongeup and another in Iksan of North Jeolla. The two factories then send daily 160,000 prepared chickens to 15 out of some 30 fried chicken companies nationwide, according to Harim.

But their production has dropped some 17 percent from what the two factories used to produce last year.

“The avian influenza scare has led to a drop in consumers,” said Song Gi-taek, director of the business strategy department of Harim. “Plus winter is always the off-season, so we produced less. It wasn’t necessarily because we had to cull massive numbers of chickens because of the disease.”

Harim complained that it was being scapegoated in the scandal of the price hike of fried chickens.

“We provide slaughtered and prepared chickens to franchises at some 3,500 won each,” said Kim Hong-guk, chairman of the Harim Group, at a press conference last week. “I agree with the people who say that it’s not right for BBQ to raise the price of fried chickens, although the government must think twice before intervening in the market.”

A Harim employee also said that Harim provides chickens to franchises at a price set for a period of six months to a year. For this, the employee said that when the price of chicks rose from some 500 won to some 900 won after the spread of avian influenza, Harim suffered some 6 billion won loss.

Some experts said the chicken producers and retailers in general should not be prevented from raising the prices of chickens due to the mass culling of the birds.