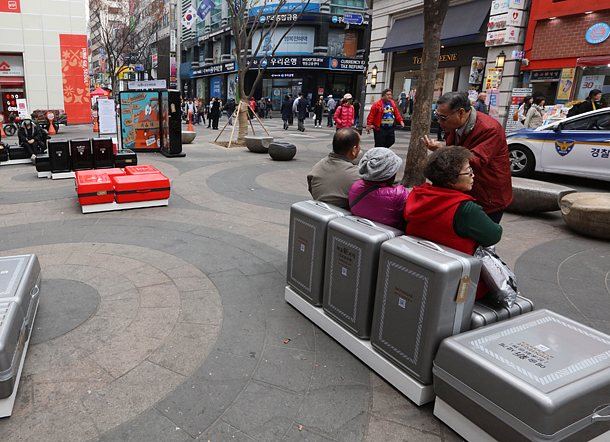 Seoul’s Myeong-dong area, which used to brim with Chinese tourists, has become quiet since the Chinese government banned sales of travel packages to Korea on March 15. [YONHAP]

The Federation of Korean Industries, a business lobbying group, urged Korea to ease its heavy reliance on China for tourism and diversify its business models.

The FKI also warned that the Chinese government’s recent ban on group tours to Korea may deal an even more serious blow to Korea than the outbreak of Middle East respiratory syndrome (MERS) that led to a slump in Chinese tourists in 2015, should the restrictions be prolonged.

“The reduction in Chinese tourists triggered by Korea’s deployment of the Terminal High Altitude Area Defense (Thaad) system could extend for a long period, unlike the case with MERS, given the tourism prohibition has been caused by more complicated diplomatic conflict,” said the lobbying group representing chaebol in a report on Wednesday.

Upon the MERS outbreak in May 2015, Chinese tourists to Korea, whose number peaked at 2.3 million in 2014, were reduced in half between May and July from a year earlier and never managed to recover to the level seen in those heydays.

The report cited data from the state-run Korea Tourism Organization that Chinese travelers to Korea accounted for 46.8 percent of total foreign tourists last year, trailed by Japanese at 13.3 percent and U.S. citizens at 5 percent.

The FKI, which is taking steps to transform into a private think tank after its key conglomerate members such as Samsung and Hyundai have departed, said that Korea needs to attract tourists from a wider variety of countries and enhance tourism programs that are concentrated on the Seoul metropolitan area and shopping. The FKI also proposed local governments develop more attractive festivals and tourist destinations and the central government set up an emergency body devoted to tackling the Chinese tourist issue.

According to the Korea Culture & Tourism Institute, 78.7 percent of foreign tourists in Korea travel to Seoul and 13.3 percent to Gyeonggi. Only 8 percent ended up visiting other regions such as Gangwon, Gyeongsang and Jeolla. Among major tourism activities, shopping was No. 1, capturing 71.5 percent of the entire pie.

The group said Taiwan was a desirable model for Korea to learn from. Taiwan saw the number of Chinese tourists slump 16 percent on year last year as the Chinese government mobilized a similar travel ban as a diplomatic weapon in tandem with the May inauguration of Taiwanese President Tsai Ing-wen, leader of a party that advocates a strong Taiwanese identity. Despite the ban, the number of foreign tourists spiked 2.4 percent on year to 10.69 million, an all-time record, last year after the Taiwanese government expanded conditional visa waivers to citizens of some Southeast Asian countries and beefed up marketing and promotion to attract more tourists from Korea and Japan.

“The tourism industry is tightly linked to the livelihood of local accommodation facilities, restaurants and tour bus operators,” said Chu Kwang-ho, head of industrial research division. “Given that those small business may be hit hard by the Thaad system, the Korean government is urged to act in a more speedy manner.”