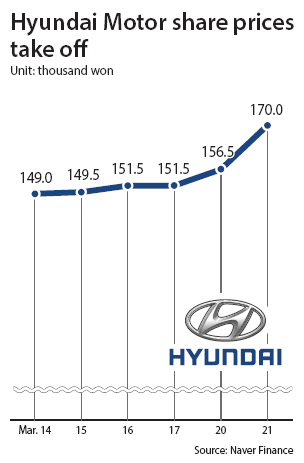 Stocks of Hyundai Motor and its affiliates made quite a rumble earlier this week, triggered by a market report by a major investment bank.

Hyundai Motor, Korea’s leading automaker, saw its share price jump nearly 9 percent by the end of trading on Tuesday, bumping the company to second in stock volume among Kospi-listed companies after Samsung Electronics. There was speculation that Elliott Management, a U.S. hedge fund management company that pressured Samsung to restructure, bought Hyundai Motor’s stock. But it was a report by Goldman Sachs that suggested that Hyundai Motor become a holding company that drove up the shares of the automaker. Along with Hyundai Motor, shares of Kia Motors and Hyundai Mobis rose 3.51 percent and 3.05 percent each on Tuesday.

“The company is part of a particularly complex and suboptimal capital and corporate structure, and we see significant value that can be unlocked from restructuring,” Goldman Sachs said in a report Monday, according to Reuters. “In contrast to the consensus view that Hyundai Mobis would become the ultimate holding company, we see Hyundai Motor as the nexus for restructuring.”

Some analysts in Korea said that Hyundai Motor indeed has some key elements to rise to the top of the management structure.

The analyst explained that receiving royalties from Hyundai Motor’s subsidiaries shows that the group may turn the automaker into a holding company, while freeing up Glovis shares demonstrates that the group is perhaps preparing for a major restructuring process and to use the Glovis stake owned by group vice-chairman Chung Eui-son, son of group chairman Chung Mong-koo and the apparent heir, in the power transfer. Chung Eui-son owns 23.3 percent of Glovis shares.

Corporate restructuring for chaebol, family-owned conglomerates in Korea, has been one of the hot potatoes involving large businesses these days. The need for dramatic shifts in corporate governance was highlighted after the outbreak of the corruption scandal that led to the ousting of former President Park Geun-hye. The scandal involved some of the major local conglomerates, including Samsung. The opposition Democratic Party pushed a bill aimed at downsizing the power of owner families and eliminating cross-shareholding.