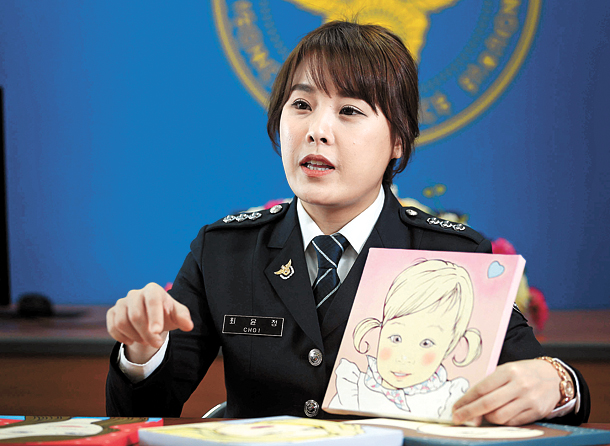 Sergeant Choi Yun-jeong holds a portrait of a child on March 2. She started pop art portraits as a hobby three years ago and has painted over 100 portraits of ordinary citizens, police officers and famous people. [OH JONG-TAEK]

In the darkness of the night, a police officer held a brush at the ready. After carefully taking in a face from a photograph, the officer wet the brush and began her work. It wasn’t a sketch of a criminal, but the smiling face of a child.

Choi Yun-jeong, 34, a police officer in Yeoncheon County, Gyeonggi, volunteers as a portrait artist for the community.

Sixty police officers, including Choi, and 60 other residents in the vicinity of Yeoncheon, were painting portraits of Korean celebrities and other notables to present as gifts on March 2. On the theme of child abuse prevention, these officers and residents took a class on how to draw a portrait of a child at the Yeoncheon police department. Choi is currently receiving portrait requests from all sorts of people on her personal Facebook page, and now has over 5,000 friends.

“I started gifting portraits of my co-workers at the Yeoncheon Police Precinct,” says Choi, adding, “My technical skill may be lacking, but when I saw the smiles on the people who received my portraits, I continued to paint.”

Choi taught herself in 2014, making use of blogs and other internet sources.

“My family lived in my hometown of Daegu and there was nowhere around my neighborhood to engage in cultural activities,” she says. “I gained 30 kilograms [66 pounds] or so and became depressed. After searching online, I found pop art portraits.”

Starting in May 2016, she began teaching people to draw their children. Her thought was that this would strengthen bonds between parents and children. “Eighty percent of child abuse offenders are their own parents,” Choi stressed.

On the last Wednesday of every month, 20 people find their way to the classes on the third floor of the Yeoncheon Police Precinct’s lecture hall. Attendees paint their children’s faces for four to five hours. While painting, they reflect on the ill-spoken wrongs they may have inflicted on their children.

“After painting my child’s face, I always think back on the careless words I’ve said or the things I’ve done,” says Choi. “Painting becomes an opportunity for reflecting on how much harm those words could do to a child.”

Everyone is free to sign up for the class through Sergeant Choi’s Facebook page. On Choi’s Facebook page, there are regular posts requesting her to paint portraits for them. One requests a portrait for their child’s doljanchi (Korean celebration of a child’s first birthday), while another asks for a commemorative gift for his pregnant wife.

“At the request of a single father in Wando County, South Jeolla,” Choi says, “I have drawn and presented a child’s portrait before. I felt very happy hearing that his son even brings the portrait to bed.”

If Choi hears of a famous person attending an event or performing near the Yeoncheon area, she rushes to draw a portrait of him or her and hands it to them in person. “Looking at one’s open heart, one can’t refuse it,” Choi says.