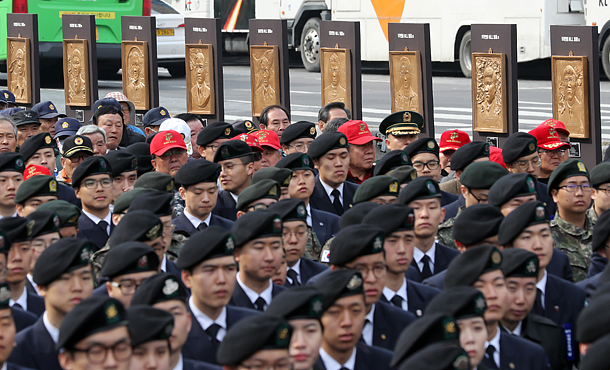 Soldiers attend the second Yellow Sea Defense Day, a memorial for the 55 fallen patriots who died while defending the Yellow Sea, at Gwanghwamun Square in central Seoul, on Friday. The memorial commemorates six sailors who died on a patrol boat in a skirmish with a North Korean battleship in June 2002, and 46 sailors who died on the Cheonan corvette, which is believed to have been torpedoed by a North Korean submersible on March 26, 2010, as well as one diver who died trying to rescue the Cheonan sailors, and two marines who died when North Korea shelled Yeonpyeong Island in November 2010. [YONHAP]