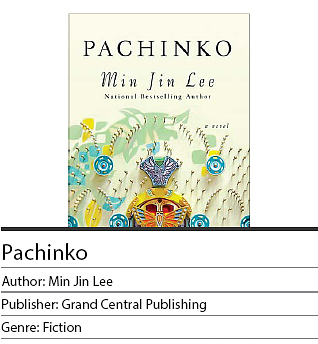 At almost 500 pages and a family saga that spans four generations, three countries and more than seven decades, “Pachinko” is an ambitious undertaking. But Min Jin Lee’s unadorned and captivating prose will sweep readers through the narrative.

Lee’s sophomore novel opens in the early 1900s in a fishing village in Yeongdo-gu, Busan, and Japan has just annexed Korea. Hoonie, a cleft-lipped, club-footed son of a fisherman, is 27. His wife, Yangin, is as “mild and tender as a newborn calf.” The Korean couple’s first three babies die but their fourth, Sunja, is alive and flourishing.

Much of the novel centers on Sunja, the modest family’s cherished daughter. Her dalliance with a persistent, wealthy but married yakuza at 16 threatens to launch her family into long-term hardship. When she gets pregnant during the Depression, Isak, a compassionate but sickly minister, offers to marry her and rescue her from a life of shame to a new life in Japan.

But things aren’t much better in Osaka’s Ikaino, a Korean ghetto “comprised of mismatched, shabby houses.” No one would rent to the Koreans, forcing them to live “a dozen in a room that should be for two. … No running water. No heat.” Lee doesn’t shy away from the litany of tragedies that economic migrants in Japan faced, but hope is always on the brink. The narrative turns a critical eye toward Japan, but it’s fairly balanced.

The Dickensian exploration of the immigrant experience continues with Sunja’s sons, Noa and Mozasu, and ends with Mozasu’s son, Solomon, in the U.S. seven decades later. Sunja survives World War II but then the Korean War makes it impossible for her to repatriate. Her offspring escape poverty by making their living in the only sector open to them: pachinko, the vertical pinball machines in gambling halls that “gave off a strong odor of poverty and criminality” to the Japanese.

Although historic events like World War II and the Nagasaki bombing are familiar terrain for fiction, Lee’s characters offer unique perspectives: Her resourceful tribe are the colonized, and then the impoverished outsiders struggling to thrive in a country that treats them with contempt.

Lee is no stranger to issues of immigrant identity. Her best-selling debut “Free Food for Millionaires,” a New York Times Editor’s Choice, centered on a first-generation American daughter of Koreans who immigrated to the U.S. The author, who was born in Seoul and moved to the U.S. with her family when she was 7, lived in Japan from 2007 to 2011, where she interviewed many Korean-Japanese. “Pachinko” introduces readers to the “Zainichi,” this community of Koreans who often are absent from literature, but their outsider status is a universal theme.

Although swiftly paced, “Pachinko” is a hefty novel whose third part lags. Read it, however, for the historical perspective. Read it for its beautiful, yet simple, prose. And stay the course for the well-drawn heroic characters in whose lives you’ll become invested. Given the current state of world affairs, Lee’s book is an important contribution to the conversations surrounding immigration and survival.