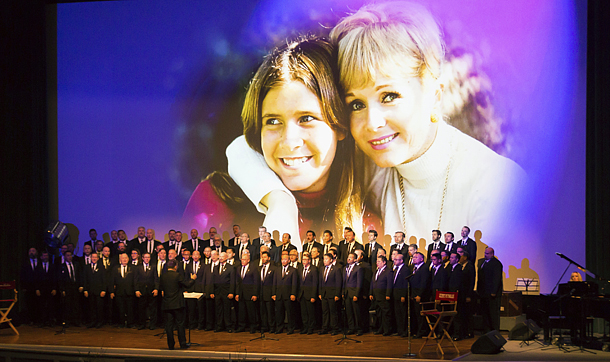 LOS ANGELES - Laughter, music and the tapping of dancing shoes reverberated throughout a public memorial to Debbie Reynolds and Carrie Fisher, which loved ones say is just how the actresses would have wanted it.

There were few tears throughout the two-hour ceremony Saturday, which honored the mother-daughter duo’s impact on film, culture and those who knew them with a mix of photos, videos, and anecdotes that kept the audience laughing and applauding.

Todd Fisher led the ceremony, which he said was intended to bring fans an intimate view of his mother and sister. He called it a show, saying his mother hated to attend memorials.

Hundreds of fans _ some wearing ``Star Wars’’ attire _ attended the public ceremony that featured numerous family photos and Reynolds’ final interview reflecting on her life and philanthropy, and one of Fisher’s high school friends sharing some her off-color emails to him.

A troupe from Reynolds’ dance studio performed an homage to ``Singin’ in the Rain,’’ the film that catapulted Reynolds to stardom at age 19. After an opening film that was an ode to Fisher’s ``Star Wars’’ role, a working R2D2 unit came on stage, mournfully beeped and parked next to a director’s chair with Fisher’s name on it. Across the stage, near a piano, sat an empty chair with Reynolds’ name on it.

Fisher, 60, an actress and writer who starred as Princess Leia in the original ``Star Wars’’ trilogy, died Dec. 27 after suffering a medical emergency days earlier aboard a flight from London. Reynolds, an Oscar-nominated actress for her role in ``The Unsinkable Molly Brown,’’ died the following day at age 84.

Todd Fisher recounted his mother’s final moments and her remark that she wanted to be with her daughter.

“It was a very peaceful exit that only my mother could have orchestrated,’’ he said to booming laughter. ``She was trained in Hollywood where they teach you to make a great entrance, and exit.’’

Fisher and Reynolds had a complex relationship, with some years of estrangement before they reunited and became close confidantes.

Actor Dan Aykroyd described Fisher, his one-time fiancee, as a chatterbox who never let him speak. He described using the Heimlich maneuver on her once, and joked that if he had been on the plane where Fisher fell ill in December, he ``might have been able to save her again.’’

He echoed a sentiment expressed by many early in his remarks. ``We really shouldn’t be here this soon,’’ he said.