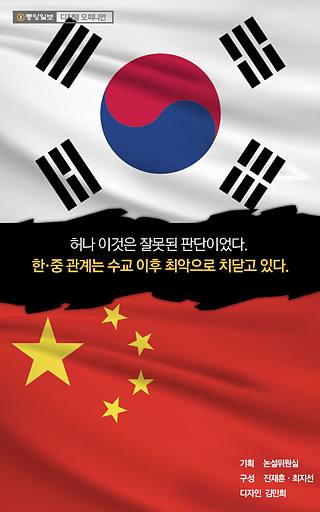 “Relations with China are completely blocked, and we don’t have any work. We are open but have no business.” Three years ago, when I started the new post as a Beijing correspondent, that’s what a diplomat at the Japanese Embassy in China told me. All intergovernment, local administration and civilian exchanges had been severed and routine contacts with foreign ministry officials were not easy. As the Japanese government nationalized control over the disputed Senkaku islands in 2012, China-Japan relations froze. In contrast, people said that Korea-China relations were the coziest ever in history.

Three years have passed, and the exact same situation that the Japanese diplomat described is happening to Korea-China relations. The only consolation is that the Chinese security police are controlling the anti-Korean protests in front of Lotte Marts unlike how anti-Japanese protests were condoned and Japanese supermarkets were plundered. I think that the diagnosis on the best Korea-China relations was wrong. Even when the Korean president was standing next to Chinese President Xi Jinping on top of the Tiananmen Gate, a superficial honeymoon without sharing strategic interests was a house of cards that could collapse anytime. “It is undesirable to confuse personal friendship between leaders with national relationship,” said a Chinese political scientist. While it is important to review the mistakes of the past, it is more important to predict what will happen in the future and prepare accordingly.

Some people are hopeful that Korea-China relations will return to good terms when the next administration begins. However, such groundless anticipation could be the beginning of further disappointment. We can find a hint for the next step of the Korea-China relations from Japan-China relations. “Lately, the China-Japan relationship is the best among the three countries,” some joke. But it is too early to say that Beijing-Tokyo relations have returned to the pre-2012 level. While Chinese President Xi Jinping is softening up when he deals with Japanese Prime Minister Shinzo Abe, there are no signs of a Chinese leader’s visit to Japan since Premier Wen Jiabao’s visit in 2010. While Chinese tourists have returned to the streets of Ginza, Tokyo, for shopping sprees, the market share of Japanese products in China is recovering very slowly.

We’d better stop hoping China will smile at Korea again once the administration is changed or the Thaad deployment is suspended or retracted. Korea-China relations will not return to “best ever” status at once, and such change is undesirable. Most of all, the damaged public sentiment will not allow it, and there is no reason to rush.
Relationships between the two nations are determined by overlapped and shared strategic interests and values only. The Korea-China ties have been on a roller coaster ride, but now, they need to return to a “new normal.”