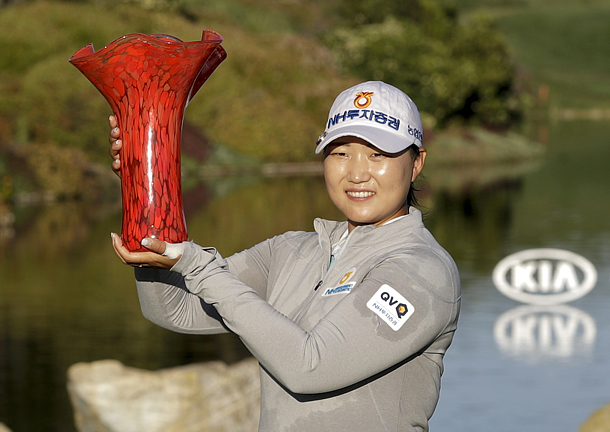 Lee Mi-rim holds the trophy after winning the Kia Classic at the Aviara Golf Club in Carlsbad, California on Sunday. With a win, Lee captured her third LPGA tour title. Lee shot a bogey-free round of 65 on the final day to win the tournament six shots ahead of Ryu So-yeon and Austin Ernst. [AP/YONHAP]

After a devastating finish at the 2015 Kia Classic, Lee Mi-rim bounced back and captured her third LPGA tour victory by winning the event at the Aviara Golf Club in Carlsbad, California on Sunday.

Lee shot a bogey-free round of 65 on the final day to finish the tournament at 20 under-par. This marks Lee’s first win since the 2014 Reignwood LPGA Classic.

Starting the day ahead by one shot, Lee did not give up her lead at any point throughout the round. Lee opened her round with a birdie and continued to make birdies on all of the odd numbered holes in the front nine. The bouncy greens at Aviara Golf Club helped Lee as her birdie putt on the seventh hole bounced once and rolled into the hole, allowing her to take a four-shot lead.

With two additional birdies on holes 15 and 16, Lee finished six shots ahead of Ryu So-yeon and Austin Ernst of the United States.

Ryu finished second, missing another shot at winning a tournament. She is the only player currently ranked in the top ten in the world without a tournament win for 31 months. She has kept herself consistent by finishing within the top-ten for the fourth time this year.

“I just need to be patient and trust myself,” Ryu said during an interview with the LPGA. “I think everything is right there.”

Meanwhile, Lee’s world ranking is projected to rise from 21st to 14th.

“It’s been a long time since I won a tournament, so I was nervous before the start of the round,” Lee said during an interview with the LPGA. “When I practiced the course, I [thought the] tee shot was most important thing, so I focused on [hitting] good tee shots [and this led to a] good result.”

Despite Lee’s 2015 nightmare, she came back even stronger. In 2015, Lee had a one shot lead over Christie Kerr prior to the final round. But by the end of the round, Kerr was the one smiling as she shot 65, while Lee shot 70 to finish runner-up.

This time, they flipped the result as Lee shot 65 and Kerr shot 70 to finish tied for fourth. With Lee’s final tournament round score of 20 under-par, she tied the tournament result set by Kerr in 2015.

Lydia Ko missed the cut in the event for the first time in 91 tournaments on the tour.

Ko missed the cut by one shot, shooting two over par, but she maintained the top spot on the Rolex World Ranking.

Ahn Shi-hyun set a new course record by shooting 63 in the final round. Ahn made ten birdies and a bogey to finish tied for 31st.

Korean golfers are having a good 2017 season on the LPGA tour, as four Koreans have won six tour events so far.

The ANA Inspiration, the first LPGA tour major event of the year, will kick off on Thursday in Rancho Mirage, California.