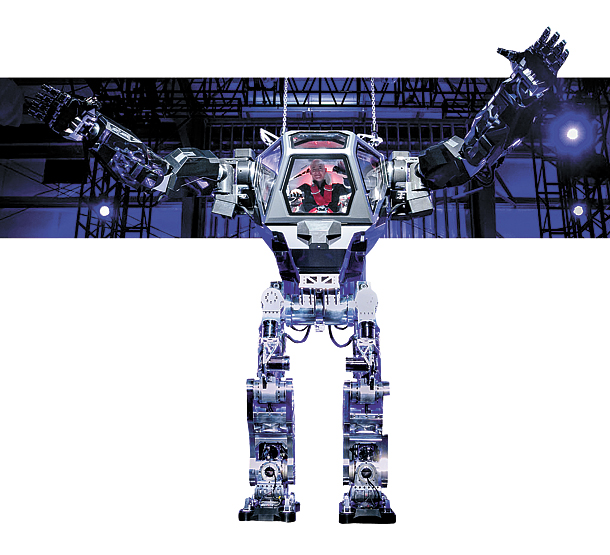 Like manned machines that appeared in the famed movie “Avatar,” Bezos sat encased in a pilot cell at the center of the robot’s body. Thanks to a special assistance device with sensors, all Bezos had to do was to simply move his hands and arms to control the robot arms in a synchronized move.

“Why do I feel so much like Sigourney Weaver?” Bezos asked the crowd, which answered with a chuckle. Weaver, an actress, played the heroine in the movie “Alien” and fought monsters riding in a similar-size robot.

The conference is an annual in-house event held by inviting only the few experts in the field of robotics and artificial intelligence. It has been noted mostly for showing off state-of-the art two-foot robots and drones, which are Bezos’ favorite, under cover.

This year, Bezos released on Twitter snapshots and video clips of himself moving the arms of the giant robot. The video of the Amazon CEO’s robot demonstration proved enough to dazzle the public worldwide and was shared at a bullet’s speed.

“It is a prototype robot that can perform jobs at dangerous sites often out of human reach,” said Yang Jin-ho, chairman of the technology firm. “We aim to complete development by the end of 2017.”

According to Yang, the estimated price of the model is $8.3 million.

Founded by Korea Internet Technology in 2014, Hankook Mirae Technology upgraded the past Method-1 model into Method-2 by adding features and changing appearances in a way desired by market.

While the tech firm spent two years of research and development in secret for the Method-1 model, its robots came into worldwide spotlight as Vitaly Bulgarov, designer for famed robots in a number of blockbusters including his latest movie project “Ghost in the Shell,” hopped aboard the team.

The most notable feature of Method robot series is that it is the largest existing humanoid robot that moves on legs and not wheels, though the legs are yet unstable. Bezos also only showed off fancy arm moving works of the Method-2 rather than moving around stage on the robot.

Even while standing put, he fixed the robot with chains connected to the ceiling in case of risks. For a more balanced and smooth leg movement, the weight of the upper body needs to be shaved off, according to industry sources.

The robot, still, is a work of the nation’s top researchers in the robotics field. Researchers from Korea Advanced Institute of Science & Technology who contributed to making another humanoid robot, Hubo, along with professors from Kwangwoon University and Seoul National University of Science and Technology took part in the development of Method-2.

“Amazon contacted us for invitation to the MARS conference earlier in the year,” a source from Hankook Mirae Technology told the JoongAng Ilbo. However, the source said there’s not much to be said about future partnership plans with the U.S. tech giant yet.

According to Forbes magazine, Bezos jumped from fifth to third in the 2017 world’s billionaires list and was recorded as the person who earned the most last year. Bezos is also an adventurer with an interest in space science who founded space exploration company Blue Origin and aims to build a space exploration park.

The picture of Bezos riding on a giant roboskeleton was enough for the crowd to recall Robert Downey Jr. in his “Iron Man” suit.

“In the race to become humanity’s real-life Iron Man, it appears Amazon CEO Jeff Bezos has taken the lead from Tesla’s Elon Musk,” USA Today reported after the demonstration.