‘Iron Fist’ is brighter story than other Marvel shows

‘Iron Fist’ is brighter story than other Marvel shows 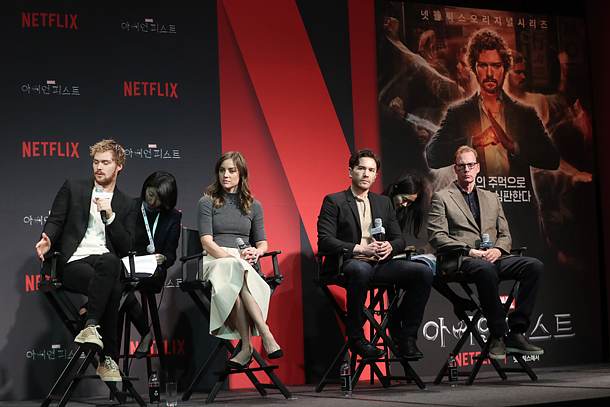 The main cast of Netflix’s “Iron Fist”, from left to right, Finn Jones, Jessica Henwick and Tom Pelphrey, as well as executive producer Scott Buck speak to reporters at a media event on March 29, 2017 at the Four Seasons Hotel in Seoul. [YONHAP]

“Iron Fist,” a new original series produced for Netflix, is brighter in tone and more focused on drama than other shows based on the Marvel universe, its executive producer said Monday.

“I think each of these shows takes its tones from the character. ‘Daredevil,’ ‘Jessica Jones,’ ‘Luke Cage’ are all very dark haunted figures,” Scott Buck, the series’ executive producer, said during a media event for “Iron Fist” at the Four Seasons Hotel in northern Seoul.’

Produced by Marvel Television for the video streaming giant, “Iron Fist” is based on the Marvel comic book superhero of the same name and stars British actor Finn Jones as Danny Rand, a martial arts expert with the ability to call upon the power of the mystical force known as the Iron Fist.

“But Danny Rand is not that way despite much tragedy in his life. He’s someone who’s always hopeful, who’s always optimistic. He is a bright personality,” he added.

The writer-producer, who previously worked on HBO’s “Six Feet Under” and Showtime’s “Dexter,” said he tried to take the show in a more lighter direction “both in terms of character, action and even the look.”

“We probably shoot more [in the] daytime than the other shows. And when we shoot at night, we make sure that its brighter with a lot of colors and light.”

“Other shows boast an older hero. Rand is young, still trying to figure out who he is as a superhero and as Danny Rand. He’s not fully bloomed like other superheroes.”

On criticisms that the series suffers from a slow pace compared to other Marvel Netflix shows, Buck said there was a reason for “Iron Fist” being “slower than other shows.”

“Netflix never tells us the show’s performance,” said Buck, “This is a little bit slower of a show than the other Marvel Netflix shows, and I think that’s largely because we were more focused on telling a story about a character evolving and growing and changing. The character of Danny Rand was the focal point.”

“As soon as I was in there and was getting myself involved in it, I found that I really enjoyed what martial arts brought to my life,” Jones said, adding that he had to learn as he filmed.

The former “Game of Thrones” star also stressed that the show is basically a coming-of-age story, as opposed to many other superhero films and series featuring fully formed characters both physically and mentally.

“For me to play a perfectly formed hero isn’t interesting,” Jones said. “What is interesting is inspecting his flaws and embracing his faults.”

Jones concluded the interview by saying, “I want people to remember Danny Rand as someone who is flawed, but who wants to do right. I think everyone can relate to that.”