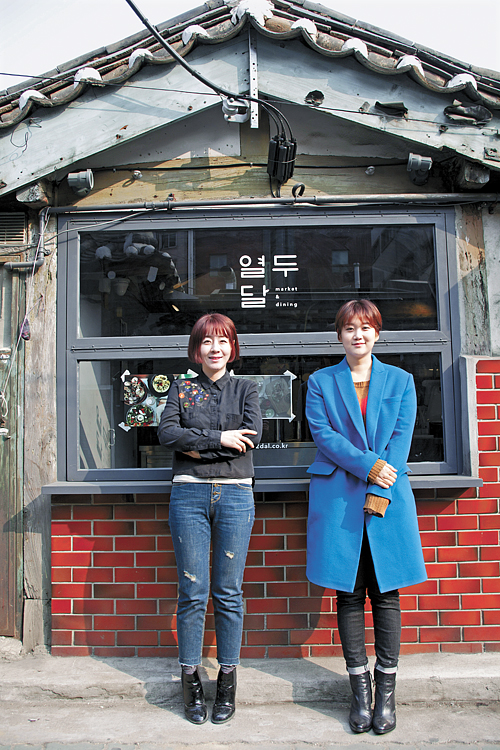 Self-described urban city planners Park Han-ah, left, and Park Ji-hyun of Iksundada stand in front their grocery store and restaurant named 12 Months, which is one of their many businesses inside old hanok houses in Ikseon-dong, central Seoul. [JEON HO-SUNG]

For several decades, a small neighborhood in Ikseon-dong in Jongno District, central Seoul, has been a quiet area filled with old hanok, or Korean traditional houses. To its east sits the Dongmyeo Shrine, a cultural heritage site dedicated to Guan Yu (160-219), a legendary warrior from China’s Three Kingdoms period (220-280), and to its west is the popular Insa-dong. Changdoek Palace and the Bukchon Hanok Village, popular tourist attractions, sit to its north. Despite being surrounded by such attractive sights, this small neighborhood sat quietly without undergoing any kind of redevelopment. But in the past year or so, the area has been attracting young Koreans all dolled up for pictures and dates, thanks to a number of trendy cafes, restaurants and craft beer bars that have opened inside old hanok buildings.

Two young Korean women, Park Han-ah and Park Ji-hyun, are the ones who brought about such changes to this outdated neighborhood. Through their company Iksundada that works on numerous projects such as interior design as well as business planning and operating, the co-CEOs transformed the area into one of the hottest places in Seoul.

In 2014, they coincidently walked through the area and thought it would be good to open a cafe in the shabby hanok neighborhood. They rented an old hanok and started a gallery cafe called Ikdong Dabang, which is now called Teum. After seeing the area’s potential to become a trendy location, the two went on and opened restaurants including 12 Months, Gyeongyangsik 1920, Dongnamah, Le Blanseu, as well as designing other stores like Proust, which sells scented candles and perfumes, the Turtle Supermarket, Uncle Videotown and so on. Many of the businesses at the moment are focused on food, so Iksundada plans to expand to other areas and open a hanok lounge bar and a manhwabang (private comic room) within the year.

Ikseon-dong is a small neighborhood with four alleyways, each stretching out only a few meters long. In the Joseon Dynasty, the neighborhood was called Ikdong or Gungdong. When King Cheoljong (1831-63) became the 25th ruler of the Joseon Dynasty, he built a house in this neighborhood where he was born and placed his ancestral tablet there. It was around 1920 when this area became a neighborhood packed with hanok as Jung Se-kwon (1888-1965), a famous property developer of that time decided to develop the area as an “urban type hanok village” and named it Ikseon-dong after his success with the Bukchon Hanok Village. Ikseon, in Chinese characters, means “becoming better.” While wealthy families settled down in Bukchon, Ikseon-dong was more accessible to commoners. The houses here were smaller in size, about 50 square meters (538 square feet) each on average. The two Parks, who are not related, said the work they do can be described as “urban space planning.”

The two Parks say there already are concerned voices that Ikseon-dong will soon fall victim to gentrification. To prevent that, Iksundada is trying to purchase hanok buildings here through joint investments so that young entrepreneurs can continue to run their businesses without having to worry about being forced to relocate due to rising rent costs.

To learn more about their project, the JoongAng Sunday, an affiliate of the Korea JoongAng Daily, sat down with the two CEOs for an interview. Here are some edited excerpts. 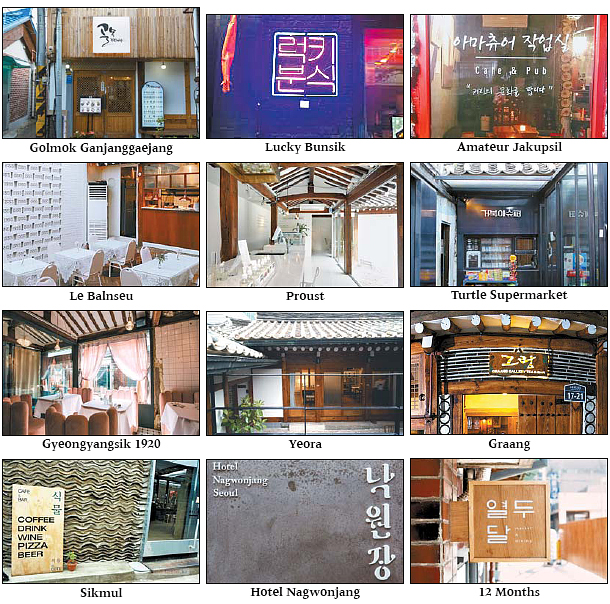 Q. It’s my first time visiting Ikseon-dong, although I’ve lived in Seoul my whole life. It’s not well known to Seoulites, is it?

A. Han-ah: We didn’t know this neighborhood existed until we accidently walked into it in 2014. It was filled with old and shabby hanok and instantly, we were lost in old memories, thinking about an old town my grandmother used to live in. We were curious so we knocked on the door of a real estate office and he told us that this neighborhood had been kept intact since 2000 because it was to undergo redevelopment but the plan got scrapped around 2014. We were so happy that skyscrapers failed to be built and hoped it could maintain its charm, all warm and friendly. We agonized on how we could maintain the old-school look while reviving the area and came up with our business idea.

Ji-hyun: When we first found this neighborhood, we were so excited. In order to maintain the hanok component, it needed “something” else that can attract people. By renting out a hanok that cost us 10 million won ($8,970) in deposit and a monthly payment of 1 million won, we created our cafe. At first, we only had two or three customers. Since we had so much time to spare with only a few visitors to the cafe, we began to study this small neighborhood and discovered so many interesting stories. Nobody asked us to do this, but we were slowly, transforming the area.

It is impressive how you kept the original structure of the hanok for all your businesses. Was that your intention?

Ji-hyun: To minimize costs, we worked on designing the interior and we followed one rule, which was to maintain the original steps and rafters of the roof. We also kept most of the tiles and floors and used it as our interior. Overall, our concept was to “maintain the old, the new way.” For example, 12 Months is a restaurant and grocery store. We collaborate with businesses that cultivate or process food ingredients and sell their products here. And in the small room of this hanok, we placed a table so that people can dine here as well. As for Gyeongyangsik 1920, we wanted to start a restaurant that young Koreans can visit together with their parents. (Gyeongyangsik literally means simple Western foods with an Asian twist that were introduced to Korea by Japan in the late 20th century.) Then we got curious about what it would be like to have foreign dishes inside a hanok, so we started a Thai restaurant. People also need a place to entertain themselves, so we opened Uncle Videotown where visitors can come and watch movies.

These are huge projects. Did you start off with a large sum of seed money?

Han-ah: No way. Most of the hanok stores that we worked on are monthly rents. After coming up with a concept for a store, we looked for investors or those who are interested in actually running them. Hotel Nagwonjang that opened in February for example, began by attracting about 60 small investors who were willing to invest around 5 million won each. That allowed our company Iksundada to purchase the building. We looked to the famous boutique hotel Ace Hotel for this project. The objects and decorations inside each room such as furniture, towels, ornaments for example are all works of artists and guests can purchase the items they liked in the lobby.

You call yourselves urban city planners. But you can’t get involved in every single one of the stores in Ikseon-dong, right?

Han-ah: Of course not. Among about 130 hanok that are here, 30 of them have changed into commercial facilities. There are many hanok currently that are undergoing renovations to become retail spaces. I also heard many businesses that used to be in Hongdae or Gangnam moved here. In the next two to three years, I think Ikseon-dong will see many new businesses opening up. Many of them come to us to draw up a business plan and some do it on their own. What we do these days, is be nosy and visit those who are thinking of starting a business here. When we get the information from the realtor that so and so are looking to start a business here, we go straight ahead and talk to them about our concept. Even if they don’t want our help, we tell them that it’ll be great if they could maintain the hanok’s basic structure and the atmosphere.

Ji-hyun: If they become grouchy and argue, then we have nothing to say. But we believe in order for Ikseon-dong to be loved by its visitors for many years, it needs to persistently maintain its unique identity, such as the scent of the old days found in each hanok, or the warmth and coziness that the aged buildings give off.