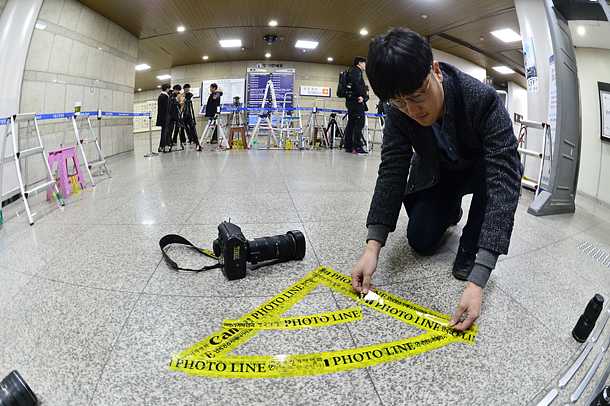 A photojournalist Wednesday marks a line at which former President Park Geun-hye will be asked to stand for photographers on her way into the Seoul Central District Court today. [YONHAP]

Former President Park Geun-hye will appear in her own defense in a courtroom tomorrow as prosecutors ask to arrest her for allegedly receiving bribes and abusing the power of the presidency.

The prosecution said Tuesday Park’s lawyers informed it that Park will attend a warrant hearing scheduled for 10:30 a.m. in the Seoul Central District Court. A ruling on the arrest is expected to be made late tonight or early Friday morning.

She is not required to attend.

A prosecution source said Wednesday Park will proceed directly to the court, skipping the usual process of document checking before a warrant hearing.

Park was impeached in December by the National Assembly over a series of corruption and abuse of power allegations. The Constitutional Court terminated her presidency on March 10, 2017, lifting the presidential immunity that shielded her from criminal prosecution.

After subjecting her to 22 hours of questioning on March 21, prosecutors applied Monday for a warrant to take Park into custody to investigate and prosecute her.

The prosecution source said it had yet to be decided who will represent the prosecution at the hearing, but senior prosecutors Han Woong-jae and Lee One-seok, who questioned Park earlier this month, are likely candidates.

No decision was made yet on where Park will await the ruling after the hearing has concluded. “Normally, the court consults the prosecution and inform it of the waiting place,” he said. “But no decision is made yet.”

Under the law governing the criminal litigation process, the court can pick from among a detention center, a nearby police lockup or a temporary holding facility inside the prosecutors offices.

The Seoul Central District Court has often ordered suspects to wait in the lockup of Seocho Police Presinct, which is closer to the court than the Seoul Detention Center in Uiwang, Gyeonggi. Speculation is high in legal circles that Park will await the ruling at the Seoul Central District Prosecutors’ Office’s lockup because of its proximity to the court and to minimize security hassles.

“If the warrant is issued, Park will immediately be sent to the Seoul Detention Center,” a court official told the JoongAng Ilbo. “If rejected, she will be released.”

On the eve of the hearing, Park remained in her house in southern Seoul. Yoo Yeong-ha, one of her lawyers, visited her home around 1 p.m.

Park’s presence at the hearing is not required by law so observers expect her to aggressively defend herself.

The former president did not attend any session of her impeachment trial at the Constitutional Court even after the judges strongly advised her to. Her lawyers recommended she make a closing argument in that trial but she did not.

Park is currently facing 13 charges. She is accused of receiving bribes from Samsung in collusion with her longtime friend, Choi Soon-sil. Choi and Samsung Electronics Vice Chairman Lee Jae-yong are currently undergoing separate trials for the bribery.

The prosecution argued that it wants to detain Park because she may destroy evidence. They said Park’s denial of all charges, despite evidence found so far, fuelled concern that she will destroy or manipulate evidence.

Prosecutors also said it is only fair to detain Park because her alleged accomplice Choi and others involved in the scandal were being detained. Dozens of lawmakers supporting Park on Wednesday submitted a petition to the court urging it to reject the warrant request. The petition was signed by 82 lawmakers, according to Rep. Cho Won-jin of the Liberty Korea Party (LKP). Eighty of them are reportedly members of the LKP, which Park is still a member of, and two are independents.

Cho held a press conference on Tuesday to urge the court to reject the warrant request. “For the sake of a grand unity of the country, the court should allow her to be tried without detention,” he said.